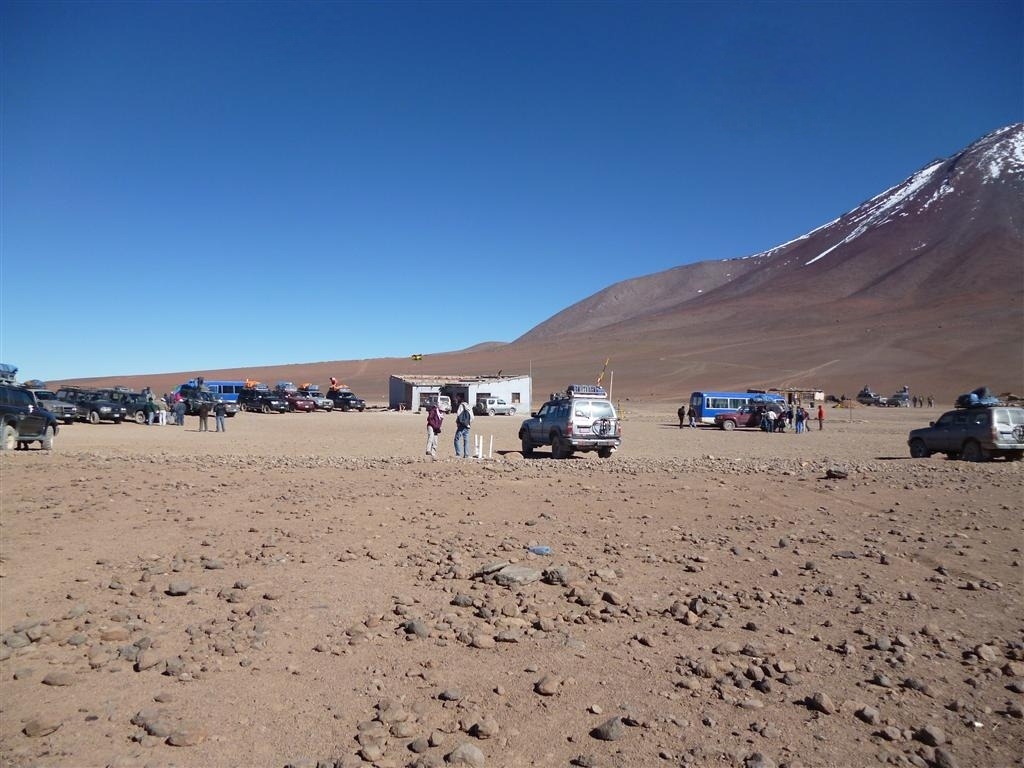 As soon as we reached Uyuni after the Salar de Uyuni tour from Tupiza, I knew I didn’t want to stay even a day in Uyuni.

While the town was not as bad as I’ve heard, there’s just not much to do there. It was very small and most people really only stop there for the Salar. I asked Maria, our cook from the tour, before saying goodbye how I could get to San Pedro de Atacama that same day and she recommended 3 tour agencies that provide a direct transfer to Chile. There are also buses that would take you to Chile, but they go to the city of Calama, which is a couple hours north of San Pedro, and the bus schedules are not guaranteed as there may not be enough passengers.

Our group walked off together to the main plaza before giving our farewells. Just outside the plaza I noticed a jeep stopping at one of the tour agencies, Mistica, which turned out to be one of the agencies Maria recommended. I quickly went inside to ask if they had transportation that day,.

Luckily, there was one scheduled in 3 hours with 3 passengers already booked. One of the passengers was actually someone I ran into in the Salar during the tour. They can only take up to 4 people in the jeep so I lucked out and that trip was guaranteed to depart as it was now full. Otherwise, I’d have to wait until they get more passengers.

The transportation cost 280Bs ($40), which was a bit steep. But then later I realized that it actually included 1 night of accommodation in a guesthouse in the middle of nowhere, dinner, and breakfast as well. So it was actually not too bad.

It was about a 7-hour ride total to reach the border. There’s a fee of 150Bs to get past one area on the way to the border, the Sol de Mañana. If you’ve already paid for this ticket during the tour and it’s been less than 4 full days since, you can reuse it so you won’t have to pay again.

The border crossing on the Bolivian side was very small and simple. You can probably sneak past it easily without detection. We waited there for about half an hour waiting for our shuttle transfer that will take us to the Chilean side. At this point, the jeeps also pick up passengers from Chile who wanted to do the Salar de Uyuni tour from San Pedro de Atacama, who were on the shuttles. So they basically just exchange passengers.

From the border, it was about an hour ride to reach the small town of San Pedro de Atacama. You’ll see the difference right away as soon as you leave Bolivia. The road suddenly became paved, with lines and signs on the highways. It definitely felt like we were in a much more developed country.

Just before entering the town of San Pedro de Atacama, we had to go through the Chilean immigration and customs. Americans are supposed to pay about $140 reciprocal fee when entering Chile, but I wasn’t asked for it. It’s possible they only charge this fee if you’re arriving by plane in Santiago. Make sure to save the small paper they stamped as you’ll get asked to provide this when you leave Chile.

The customs here was also much stricter. They scan all luggage through a scanner and they actually pay attention to the content. I had a lot of syringes in my bag and it got flagged and I had to explain the reason for them. I pointed out that the label on the box had my name on it and it was good enough reason for me to be carrying them. They also got a kick out of my gigantic Dell Streak Android phone when they saw it.

From there, the shuttle took us to the town’s center. It was close enough, probably about 1km, that you could just walk it if you wanted to.