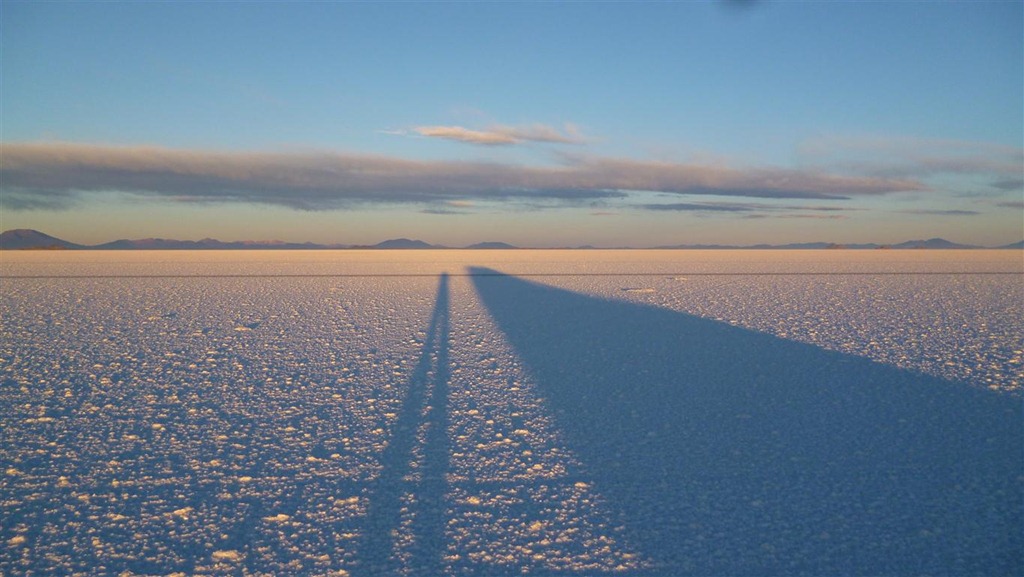 There are different ways to visit Salar de Uyuni. The most popular is to start in the town of Uyuni and do a 3-day tour from there. You can also visit the salt flat on a day trip as it’s very close to the town. You can even start from San Pedro de Atacama in Chile and do a 3-day tour to Uyuni.

I was originally going to do the 3-day tour starting from Uyuni but then a girl I met in my Spanish school in Sucre recommended to start in the town of Tupiza and end in Uyuni as it’s supposed to give better views and takes 4 days to complete. This option is more expensive but it was well worth it.

I went with the 4-person group option with La Torre for 1,300Bs as I figured it would be nice to have more space in the jeep as we’d be spending most of the time inside it.

Sleeping bag rental: 50Bs ($7.14), this is optional but be warned that the nights can get very, very cold

Sol de Mañana Entrance: 150Bs ( $21.43), save your ticket if you’re going to San Pedro de Atacama, Chile from Uyuni after the tour as you’ll be entering the park again. Note that the ticket is only valid for 4 days.

Note that an English speaking guide is not included in the price, you can hire one with your group for around $80 for the duration of the trip.

What’s included in the tour cost?

Here’s the 4-day breakdown of the tour. 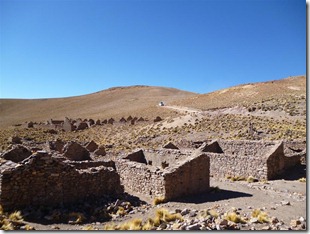 We had breakfast at 7:30am at the hotel as the tour leaves at 8:00am. I still haven’t met the other members of my group at this time but I figured they’d be in the breakfast area as well. There were 7 of us there so one group only had 3 people.

There were 2 jeeps waiting for us outside, I was assigned to the second one with 3 girls from Ireland who were on their round-the-world trip together: Aine, Liz, and Julie. We were also introduced to our driver and cook: Freddie and Maria. After the quick introductions we were on our way.

Since our guides only spoke Spanish and the 3 girls didn’t speak much Spanish as they’ve only been on the road for about a month, I ended up doing the translation. I only hoped I made the translations correctly as there were times that I was only picking up some words and tried to make sense of it.

We stopped at some viewpoints before having lunch at a small village in the middle of nowhere. Maria prepared a delicious spaghetti and fruits for lunch. We then continued the journey and it was quite a long ride with not much changes in scenery. Along the way, Maria gave us some lollipops. We were like adopted kids on a road trip with our surrogate Bolivian parents.

Late in the afternoon, just before sunset, we reached our accommodation for the night. No kidding when they said basic accommodation. There was electricity in the place, which looks like it came from the solar panels, but it was very weak. The light bulb in our room barely lit up and it was freezing in the night. There was 1 bathroom with 2 toilets and no lights. Someone later placed a candle inside.

The bathroom was shared with over 20 people staying there, so after dinner it gets packed. There’s no shower and not much privacy either, just a curtain covering the toilets.

We had soup, burger, and mashed potatoes for dinner. The soup really helped warm us up a little bit. Maria also gave us an herb to drink to help with altitude adjustment as we climbed up pretty quickly this day.

We were up just before 7am for breakfast and left our accommodation at around 7:30am. The scenery this day was much better. We visited a bunch of lagoons, such as the Laguna Verde and Laguna Colorada, volcanoes, geysers, and saw lots of flamingos. 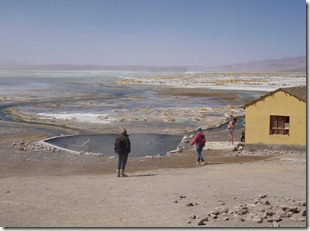 We also stopped by at a hot spring. It was freezing and I was hesitant to go in but since I haven’t taken a shower the day before I decided to go for it. I was freezing my ass off outside wearing only shorts, but when I finally got into the hot spring it felt so good that I just wanted to stay in there all day! It was totally worth it, I felt great the next few hours because of it.

We also had lunch in the building near the hot springs before we continued our journey. Loved the changing landscapes this day, very beautiful.

We reached our accommodation for the night a bit early, around 4pm. This place is definitely much nicer that previous night’s, but still freezing. Maria was able to secure the dining table right next to the small fireplace which felt really great. We had our afternoon snack of tea, coffee, and cookies while waiting for dinner to get ready.

It looked the fireplace brought back some memories back home for the Irish girls as they told me how their moms and grandmas took care of them back home, preparing a nice cup of tea and even warming up their pajamas before going to bed. I have to say I was a bit jealous as I never had that experience and seemed a really nice way to get ready to bed.

Another early morning start, we were up at 7am for breakfast. This time we had pancakes! Maria was up at 4am making them and they were delicious! No syrup, but the dulce de leche (sweetened milk) did the trick. I’m not really a pancake person, I usually have rice and meat for breakfast back home, but the girls seemed to be really happy to have pancakes for breakfast.

Our first stop for the day was at the Desierto de Dali and took some pictures by the Arbol de Piedra (tree of stone), a big rock in the shape of the tree as the name implies.

We also stopped at more lagoons, with the best one saved for last as we saw tons of flamingos up close and they weren’t bothered by our presence at all. We were able to get so close that we could probably touch them if we wanted too. 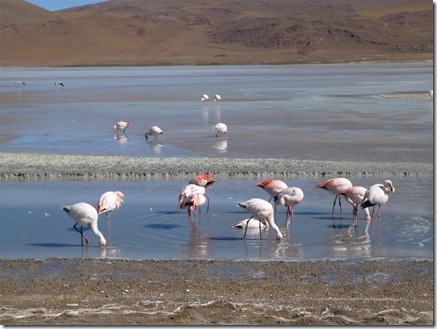 For lunch, we stopped at a spot near a semi-active volcano. The area was surrounded with rock formations. Freddie told me they were lavas from the last eruption. We wandered around while Maria prepared lunch. I lost track of time and went a bit further away until Freddie found me and everyone was already finishing lunch when I got back. We had some very tasty chicken, rice, and fruits. I haven’t been disappointed with the food so far, they’d all been great.

We also stopped at train tracks in the middle of nowhere that’s supposed to be used by cargo trains connecting Uyuni and a city in Chile. Before heading to our final accommodation of the tour, Freddie told us we were going to stop at a supermarket so we could buy whatever we need for the final night.

We’ve been talking about how nice it would be to have a glass of red wine before bed, especially with the cold weather and all. When we stopped at the small village of San Juan where the supermarket was located, we made it our goal to buy some red wine. The supermarket was actually just a tiny store and the only one in the village.

A bottle of wine cost twice as much as it should be but we’re in the middle of nowhere and didn’t really have many options. We decided to go with the more expensive Chilean red wine instead of the local Bolivian one because the girls have already tried that brand and they liked it. We bought 2 bottles to share with everyone. 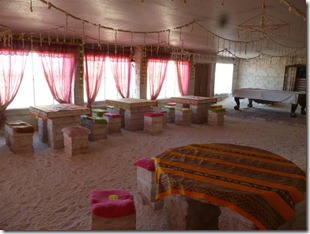 The accommodation for this final night of the tour was a surprise to all of us. It was way nicer than the others and it’ was made of salt! You can see the ground and walls covered with salt. I was tempted to lick the walls. There were also 2 showers in this salt hotel that costs 10Bs ($1.43) per shower.

As usual, we had our afternoon snack while waiting for dinner. We were talking about how disappointing it must have been if we have decided to start in Uyuni instead of Tupiza as you’ll get the nicer stuff first then it goes downhill from there.

We had lasagna for dinner, which again, was very delicious and invited Freddie and Maria to join us. We opened up our bottles of wine, poured a glass for everyone, and somehow managed to have a conversation in Spanish and talked about families, work, drinks, and the final day of the trip.

The beds and blankets were much better this night as well, and also not as called as the nights before. We were all able to sleep very well this night, probably partially due to the wine as well.

The final day of the tour and also the earliest start. We had to leave by 6:00am, to catch the sunrise. It was freezing cold so when we reached our destination most of us decided to just wait in the car and watch the sunrise from there.

Once the sun was up, we continued driving to Isla Incahuasi, also known as Isla de Pescado, or the “Island of Fish” as it was shaped like a fish. It cost 30Bs ($4.23) to enter the park (save your ticket to use the bathroom). Lots of cacti on this island and we walked up the hill to get a better view of the salar and the island while Maria prepared the breakfast. 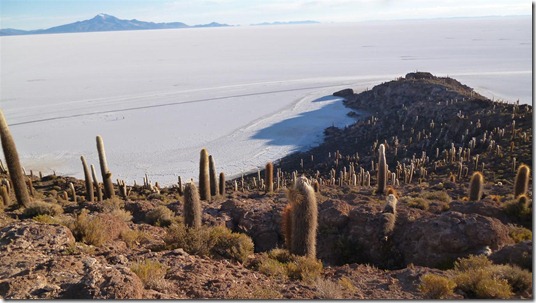 After breakfast, we walked around the salar for a bit and Freddie picked us up on the way. We then drove to the middle of the salar and Freddie showed us some holes in the ground with water inside and he collected some salt crystals from it. It was really amazing to see how huge this salar is, it looked like it goes on forever. Not sure how the drivers find their way, I didn’t see Freddie use a GPS or any device. I’m guessing he just follows the view of the mountains. He told me he had gotten lost there his first time. 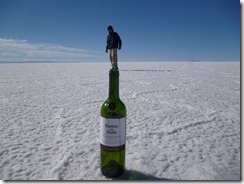 We then continued on to the next area where Freddie told us we could take some “fotos locas” (crazy pictures). The idea was to use a small object and move far enough behind it that if you take a picture directly in front of the object, it would look much bigger. So we took pictures of us standing on top of a wine bottle, standing on a camera, and on a spoon while one of us held it and pretended we’d be eaten.

We also stopped at the very first salt hotel that doesn’t seem to be in operation any longer, an area with salt mounds, and another small village near the town of Uyuni.

We then finally reached our last stop of the tour, the small town of Uyuni. The girls were headed directly to La Paz, Bolivia and I was on my way to San Pedro de Atacama, Chile that same day. We gave our goodbyes to Freddie and Maria and hung out for a bit at the main plaza in Uyuni whlie waiting for our rides. Not much to do in this town other than the salar so we were glad to not have to spend a night there.

It was definitely a great tour and we were fortunate to have Freddie and Maria as our guides and I was fortunate to join a group that I got along with very well. I definitely recommend doing this tour if you’re in Bolivia and if time allows, start in Tupiza.