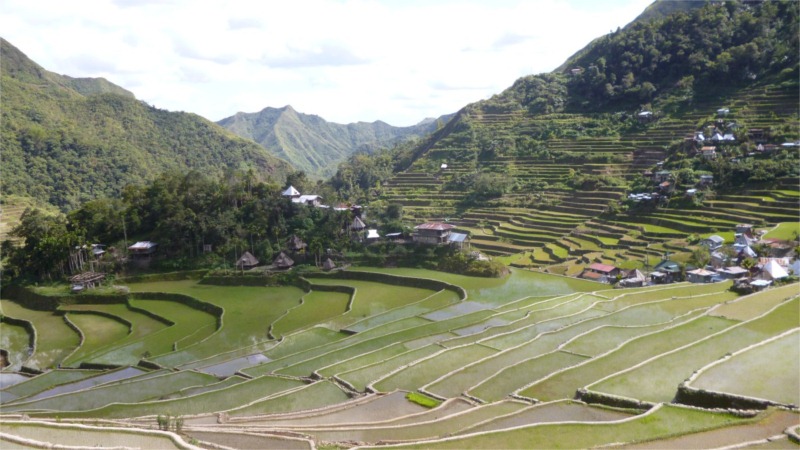 After a 10-hour, uncomfortable bus ride from Manila, we finally reached the town of Banaue. The town is known for its over 2,000-year-old terraces built by the Ifugaos. We spent the next two days here exploring the different terraces in the region.

Getting there from Manila

The only bus that goes to Banaue from Manila is by Ohayami Trans, located in Sampoloc, Manila. The bus terminal is about 30 minutes to an hour from Makati, depending on traffic, and costs around P150 by taxi.

They only leave at night and the current schedule is 9PM, 9:45PM, and 10PM. We were told to get there by 6PM, however, to secure a spot.

There’s a mall (SM Santa Mesa) about 15 minutes away by jeepney (fare is P8) that you can go to to have dinner/kill time, which is pretty much what we did.

The bus was pretty basic: not much leg room, no toilet, and freezing cold because of the air-conditioner (bring something to keep you warm). It did make a couple of stops for food/toilet. 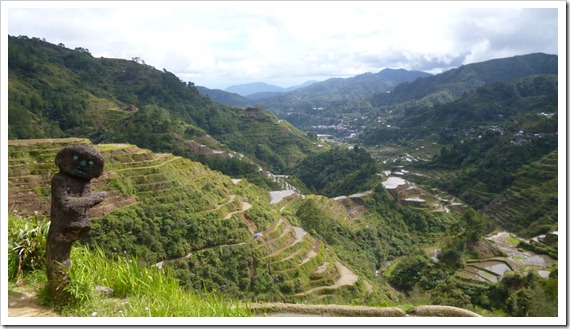 We got to Banaue around 7AM and it was raining. We had no idea where to stay in Banaue when we arrived, so we just took the advice of one of the locals there and went to People’s Lodge, which I do NOT recommend. The guesthouse itself is not bad, but I found the owner very rude and they charged for everything from toilet paper, to towels, to hot or cold shower, and luggage storage for the day even if you already stayed there the previous night and just needed a place to store your luggage as your bus leaves at night. This is the first time I’ve ever stayed in a place who charges their guests for luggage storage the day they check out.

I shared a room with 2 American guys, Andrew and Dax, who I met at MNL Boutique Hostel in Makati (highly recommended hostel, newly built and friendly staff). We paid P900 total for a private room with a private bathroom.

After a couple of hours nap, we rented a tricycle for the rest of the day for P600 to take us to the different viewpoints in town and to a nearby village. Thankfully, the rain has already stopped at this time and the sun finally came out. Beautiful views along the way and the village that we visited had a few traditional Ifugao huts to check out. 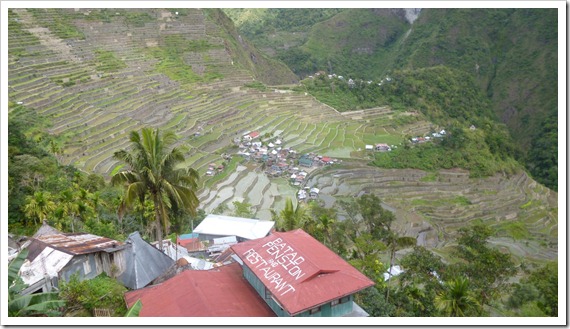 We woke up early to catch a jeepney to Batad, which is really the main attraction here. We talked to a guy the night before but we felt he was charging us a little too much, so we decided not to go with him.

The way it usually works is you rent out an entire jeepney for the day. The hotel we were staying at charges P2,800 for the jeepney, but if you ask at the Tourist Information Center in the center of town they only charge P2,500.

At this point, there were 4 of us total who wanted to do Batad, we met another guy, Carlos, the day before. During breakfast, while deciding how we would get there, we overheard 4 other guys at the next table going to Batad as well and already talking to a tour guide. So we asked them if we could all go together and split the cost and they agreed. Then a couple also joined us making the group 10 people, the maximum they will take.

It takes about 1 hour to get to the saddle point in Batad, where we would need to do some hiking to get to the rice terraces. However, on the way there, one jeepney got stuck on the road so we had to wait for about 40 minutes for him to get out. We took this time to get to know each other and shared some funny stories. The driver of the jeepney in front of us even tried to entertain us by doing some impersonations, the Chris Tucker one being the funniest.

Once the road finally cleared, we continued on, but then hit a pothole resulting in a flat tire! So we had to wait another 15-20 minutes for the driver to change the tire.

At the saddle point, you can buy some snacks and rent a stick. I highly recommend renting a stick as it really did help a lot with the hiking as there were lots of ups and downs and narrow sections. A stick rental only costs P10. 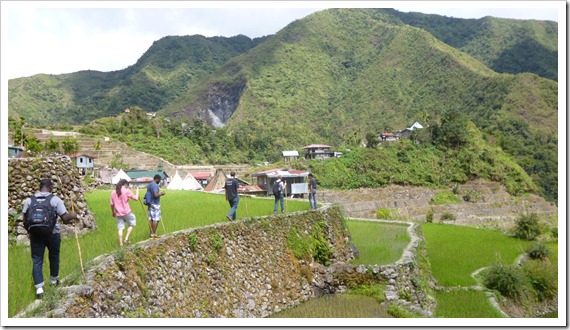 We also hired a guide for P1,000, which is not really required but does help, especially with getting to the waterfall area. Once we reached Batad, we had to pay an entrance fee of P50. We also stopped by at one of the restaurants to order food, which won’t be ready until we get back from the waterfall.

The scenery here is really amazing, better than the terraces in the main town. If you only have one day, do this one and skip the one in town. We walked across the terraces and I just couldn’t stop taking pictures. The paths are quite narrow, so watch your steps as you walk and try not to get distracted by the scenery.

We headed back to the restaurant after the hike to the waterfall for a late lunch. It was a good location to eat as you could see the rice terraces from here. We took our time here before heading back up to the saddle point.

We made it back in town with just about half hour to spare for some of the people in the group to catch their overnight bus back to Manila. It was a good, long day of hiking and great group of people. It was also a nice change of scenery, I was getting tired of only seeing big cities and beaches.