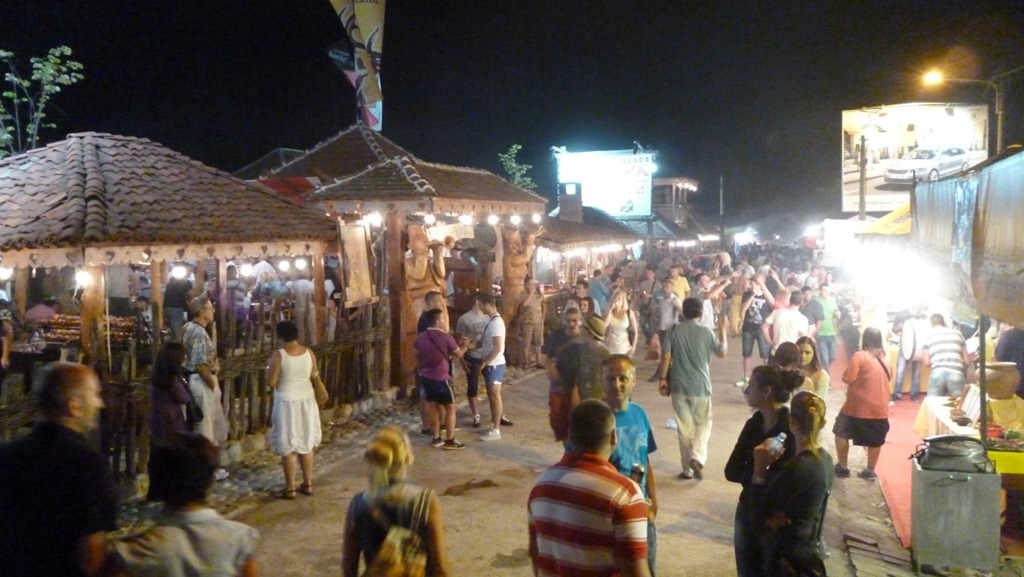 I would’ve never found out about the Guca Trumpet Festival, one of the biggest festivals in Serbia, if my Serbian friend didn’t mention it. Hundreds of thousands of people attend this festival in Guca (pronounced ‘goo-cha’), a village of approximately 2,000 people, every year in August. This year was the 53rd time the festival had been celebrated.

I’m not really big into partying and wasn’t really sure what to expect in a trumpet festival, but I decided to time my arrival in Serbia to make it to this event. The event lasts 7 days, but it doesn’t really get busy until the last 4 days. I originally thought of attending the last 2-3 days, but then later decided to just attend one day as one full day of partying is usually enough for me. I just wanted to get a taste of what it’s like to be at the Guca festival.

Getting There from Belgrade

The week of the festival, there was a CouchSurfing meeting in Belgrade where I met a bunch of people who were going that Friday, so we decided to go together.

We met up at the bus station in Belgrade around 11:30am to take the 12:00pm bus. You can view the bus schedule here: http://www.bas.co.rs/basweb_eng/RedVoznje.aspx?lng=en. The ride took about 4 hours. The ticket costs around 1,450 Serbian dinars. 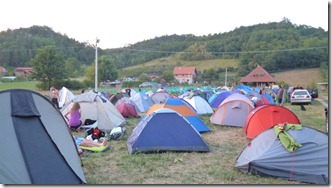 It was very hot when we arrived and we were actually glad we didn’t arrive too early as it would’ve been too hot to walk around the village. We looked for the free CouchSurfing camp called “Planet Paprika” right away to meet other CouchSurfers. There were a lot of people there already when we arrived.

One of the guys from the group brought a tent with him as he wanted to stay there until the end of the festival. He just bought the tent brand new but it looked like it was actually missing the main tent and only had the cover and we were scratching our heads on how to put it together. We did the best we could to make it look like a tent but still looked funny.

After setting up the tent, we walked around the camp and talked to other CouchSurfers who were already there and just killed time until the weather got a little cooler. Just as we were about to head out to get some food, a few people in the camp started playing music and people started to join in to dance. It looked like it will be going on for a while so myself and one of the guys decided to go on ahead to get some food and meet up with the rest of the group at the stadium later to watch the concert. 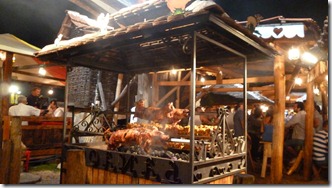 If you’re vegetarian, you’re not going to like the food here as they’re all meat. You’ll see lots of pigs roasting, huge burgers called pljeskavica, sausages, and other types of meat. There’s beer everywhere as well, of course. My friend and I got one pljeskavica and a beer each and started walking around the village.

The streets were getting pretty packed at this time. We saw groups of trumpet players playing very loudly right next to people having drinks or eating dinner who looked like they actually wanted to have a quiet time. Drunk people started climbing one of the statues. Sexy women dancing on tables. More sexy women handing out free chips or some promotional flyers. There was a small section for rides as well, somehow someone thought drunk people and roller coasters go nicely together. 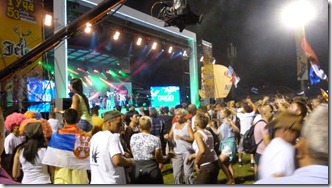 The concert was held in a big, open, grassy stadium which looked like it could easily hold 100,000 people. Drinks were not allowed in the stadium as they wanted you to buy the drinks inside, which is understandable as the concert itself was completely free. Beers were only about 200 dinars each ($2.35), which is not bad at all.

The bands were actually really good and I actually liked the music. The music seemed mostly Serbian but they sometimes play popular songs with their trumpets. It was also a good atmosphere, everyone was just having a good time and dancing. There were lots of people making circles and dancing together. Didn’t see any fights break out at all.

As far as the crowd goes, it’s mostly white people. Being Asian, I guess I kind of stood out and got asked a few times by Serbians to have my picture taken with them.

We stayed probably just half past midnight and then decided to head back to Belgrade.

Going Back to Belgrade

There weren’t that many direct buses from Guca to Belgrade, but there’s a bus roughly every hour from Guca to the nearby town of Cacak, about 40 minutes away. Ticket cost was 200 dinars.

From Cacak, we were able to catch the 2:45am bus back to Belgrade. You can again view the bus schedule from this website: http://www.bas.co.rs/basweb_eng/RedVoznje.aspx?lng=en. The ticket was 970 dinars and paid to the driver directly.

The Guca Trumpet Festival was definitely a great experience, though I probably wouldn’t go again. For me, it was just something to experience once to see what it’s like.

If you love to party and really into this type of music, though, then I’d definitely recommend to check it out You might just find yourself coming back here every year.