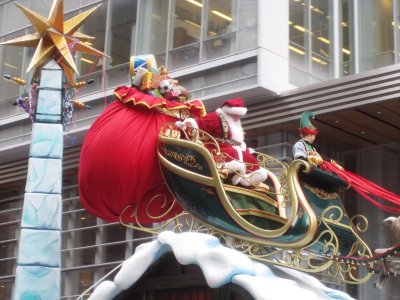 I was at the bookstore last week and I saw this book (or magazine, can’t remember) about this list of events to attend before you die. Among them were Mardi Gras, Carnivale, and then the Macy’s Thanksgiving Day Parade came up. I was like, “hey, that’s coming up soon and it’s only about an hour away, I should check it out” and so I did.

I actually haven’t paid much attention to it before, I’ve probably seen it on TV once or twice. The last few Thanksgivings I was usually still sleeping by the time the parade was over. Yesterday, I woke up very early and took the 7AM bus to New York City to see the parade. I got there around 8ish and, as expected, the place was already packed. The parade started at Central Park West and it supposed to give the best views but I figured since the parade starts at 9AM it would probably be hard to find a good spot at this time.

I decided to just follow the crowd and I ended up between 6th Ave and 42 Street. It was pretty chilly that day but at least it didn’t rain while the parade was going on (it rained later in the afternoon). There were lots of floats to see, marching bands from different states, cheerleaders, and people dressed up in funny costumes. There were also some famous people in the parade, such as Al Roker, Gladys Knight, Kanye West, Jessica Simpson, Joan Rivers, Ronald McDonald, Santa, and a bunch of other people I’ve never heard of but the people around me seem to know them.

Overall I enjoyed it, but I don’t think this is something I’d go see every year. I think it’s pretty much the same every year so unless they make a big change at some point then this is probably the last time I’d go. Well, that’s one off my list of things to do before I die :D.