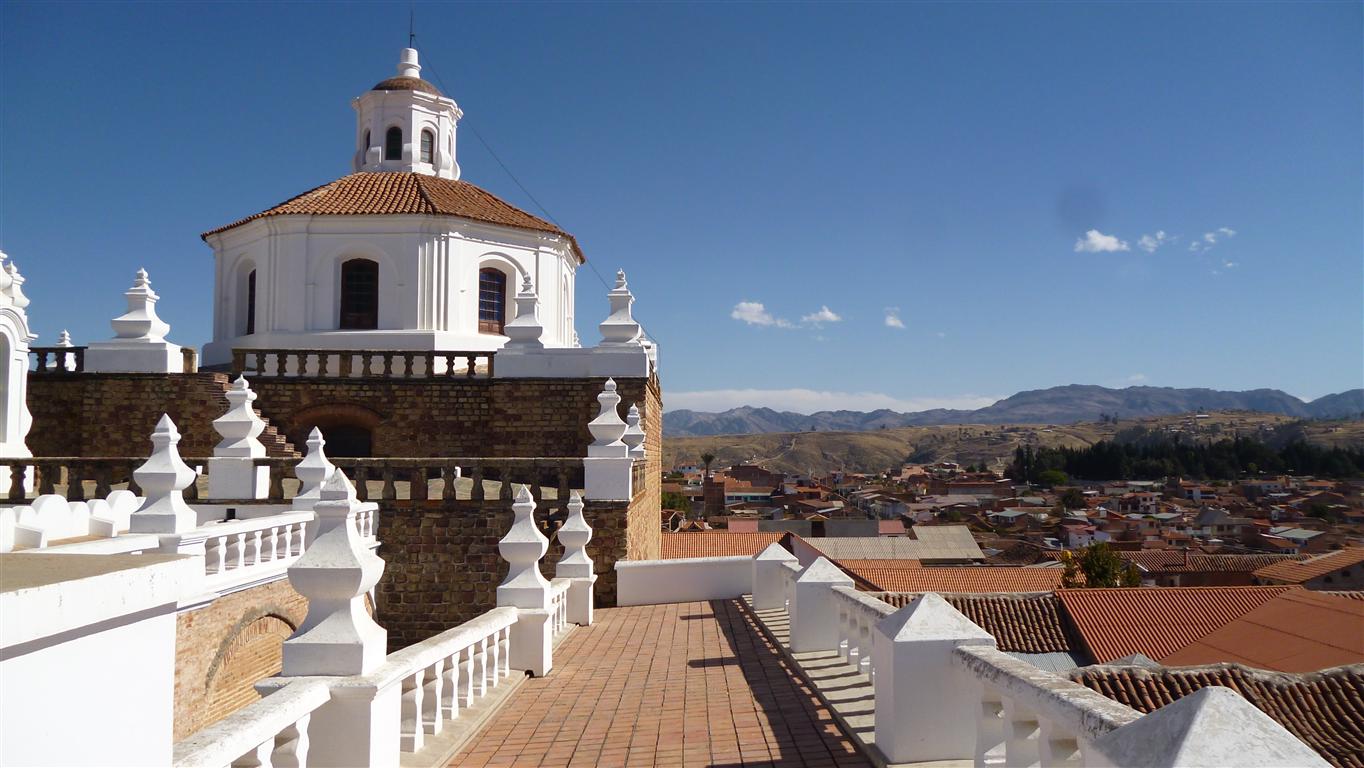 I spent 27 days in the beautiful city of Sucre. This is the longest I’ve ever stayed in the same city so far in in more than 7 months of traveling through Latin America. I started to develop a routine and felt like I was actually living there.

The temperate climate was one of the main reasons I liked this city so much. In my 27 days there, I think it only rained once or twice, and it wasn’t even bad. Most of the time it had sunny, spring-like weather. Every single day I looked forward to just walking around the city, stop at one of the many cafes for a quick snack, and spend some time in the park reading or people watching. 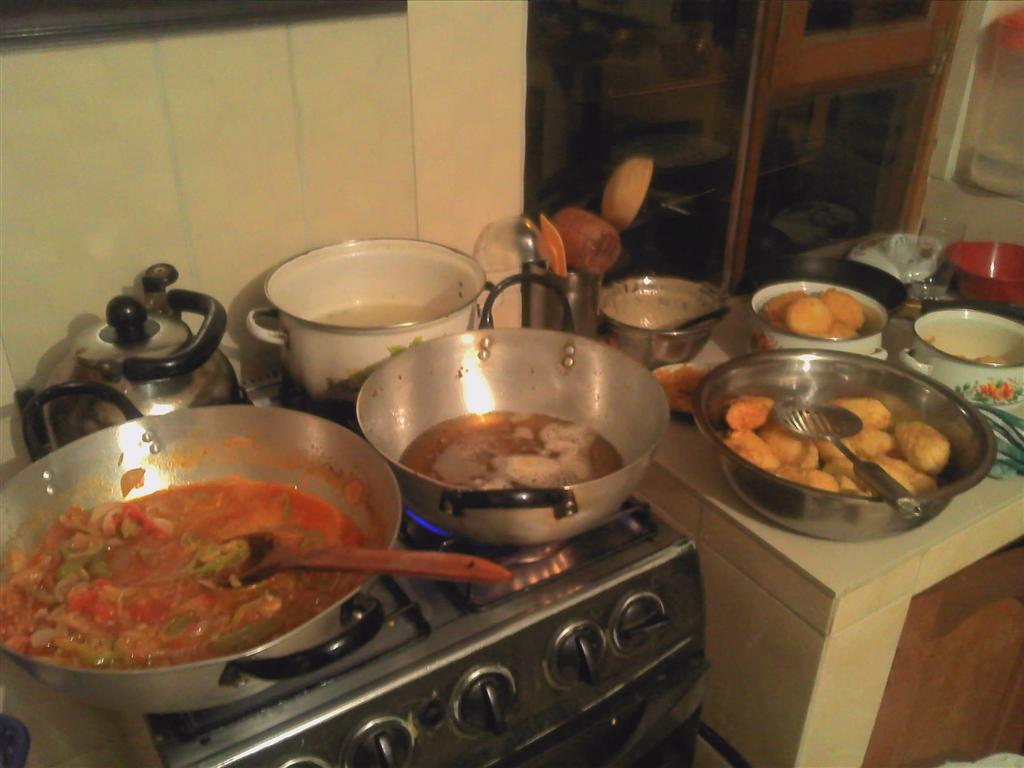 I also took two weeks of Spanish lessons here as it’s a popular place to study in Bolivia. There are many language schools in the area to choose from, with reasonable prices. I studied for one week with Fenix Language School and another week at Me Gusta Spanish School. Both schools were very good and I could recommend them. Very friendly staff.

The schools also offer activities such as cooking classes, where you can learn how to cook typical Bolivian meals, and “wallyball.” Wallyball is basically volleyball but less rules. It’s played indoor and you can use the walls to bounce the ball to the other side of the court. I actually found it more fun to play than volleyball. The activities are a great way to get to know the school’s staff and other students, and learn more about Bolivia. 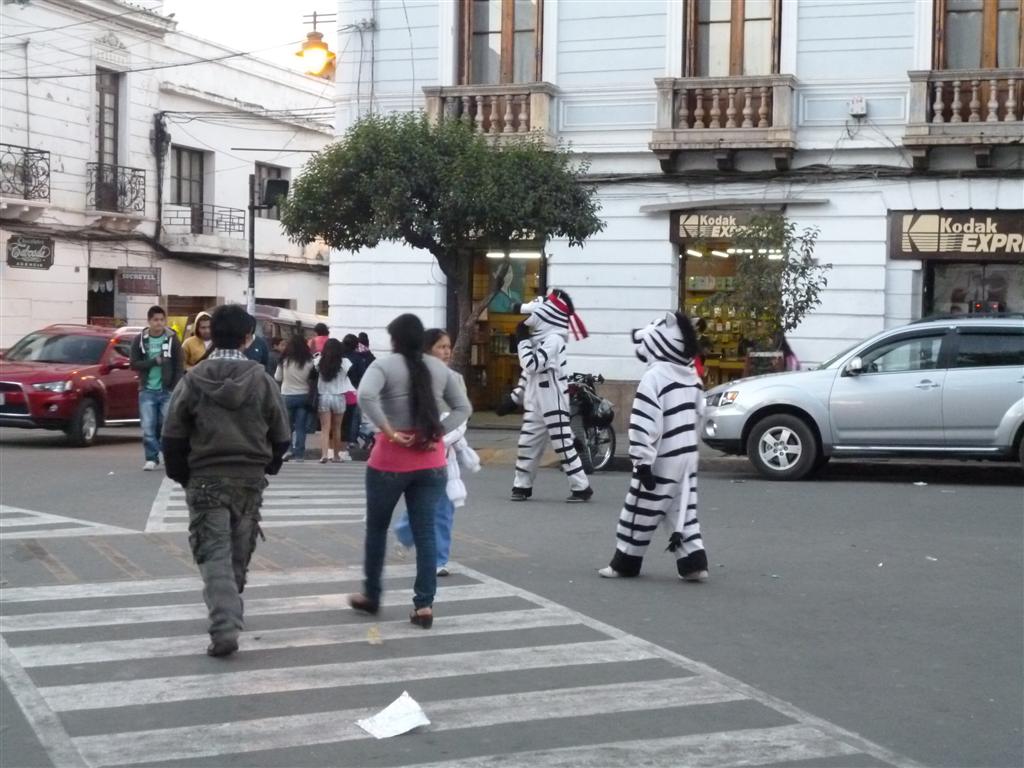 The streets of Sucre can get very busy around mid-day when school is in session as classes end for a lot of students around that time. You’ll see people dressed up in zebra costumes helping people cross the street in the main plaza (Plaza 25 de Mayo) at this time. Many young people live in Sucre. I was told that around 80% of the city’s population are under the age of 30.

There were also a lot of things happening in the city when I was there. There were parades, concerts, and fairs every week.

Cost of living here is quite low. Depending on where you eat, you can normally have a nice meal for under $3. You can also find cheap accommodation. I was renting a room at Villa de la Plata Guesthouse, which was really more like a a studio apartment, for around $7/day (cheaper if you stay longer, I was paying about $6.50/day as I stayed there for a while). Not the nicest place but it had everything I needed. It had a small fridge, an equipped kitchen, bathroom, a desk with 2 chairs, and free Wi-Fi. 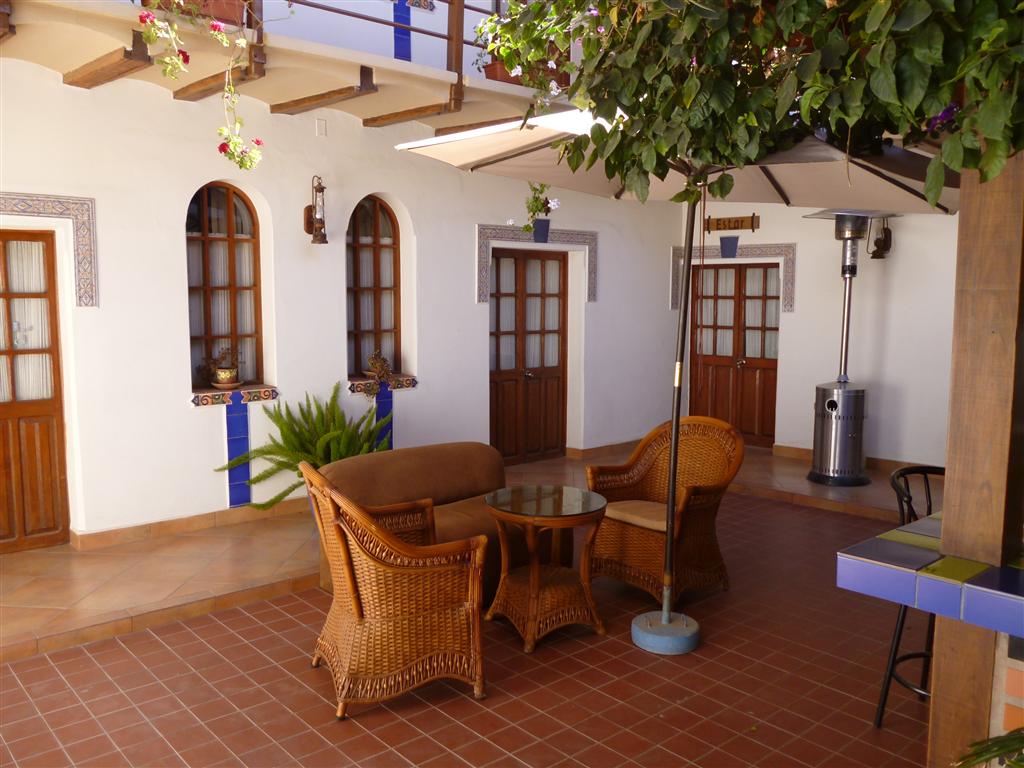 Internet was pretty slow almost everywhere I went except for one hostel I stayed in my last week there. A typical speed in most places was 256kbps downstream. But then I met one student at my school who was staying at La Escondida Hostal and he told me he was downloading at 1MB/s (that’s 8mbps or 8192kbps, that’s 32x faster than the others). I decided to stay there my last week in Sucre and was very impressed with the speed, fastest I’ve seen in Latin America so far. This hostel costs twice as much as my previous place at $14/day but it was a really nice place. It’s got an LCD TV in the room, very comfy beds, and really nice bathroom. Breakfast was included as well. To me it was worth it. I’ve checked other places that cost more but didn’t look nowhere as nice. It felt more like I was staying in a 4-star hotel than a hostel.

For shopping, you can go to Mercado Central and you’ll pretty much find anything you need here. But I was told Mercado Campesino is a bit cheaper, especially if you’re buying things in bulk, but it’s a bit further away from the center. I usually just use the supermarkets, though, as I found it much easier. There are 2 main supermarkets in the city: Pompaya and SAS. The prices were pretty much the same, but SAS was bigger. 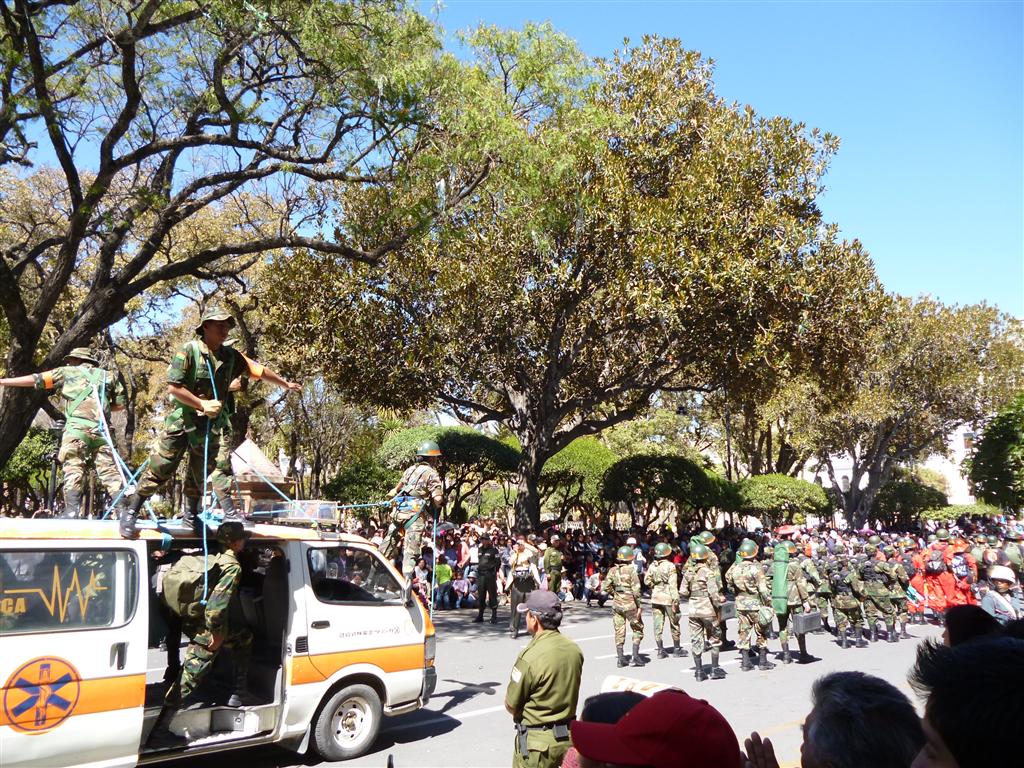 If you would like to see newly released Hollywood movies, you can also go to SAS. There’s a movie theater above the supermarket where you can watch a newly released movie for about $2.86 (20Bs). I saw the new Batman movie there in English language with Spanish subtitles. It was a decent sized theater with stadium seating. It had a food court as well. 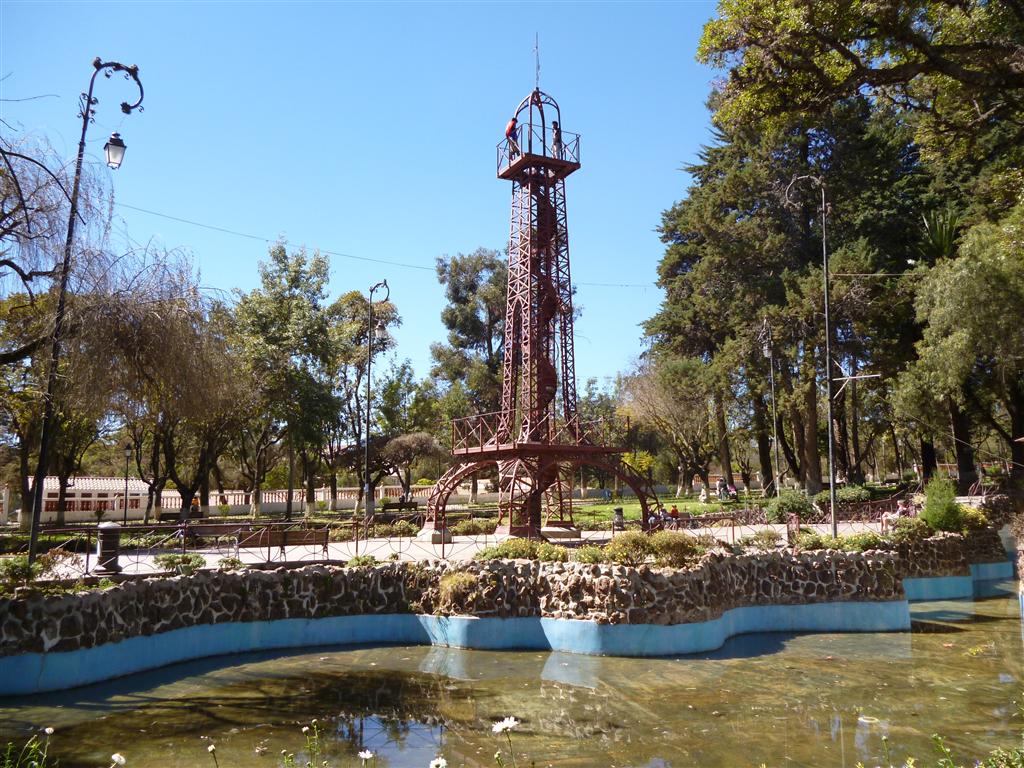 For older and other foreign films, you can go to Joyride Café. They show a film at 8:00PM every night. On Mondays and Fridays they show “The Devil’s Miner,” which is a documentary about the mines of Potosi, Bolivia. I highly recommend watching this film if you’re planning on going to Potosi to visit the mines. It costs about $2.14 (15Bs), but they normally give away free tickets to Spanish schools, so if you’re taking Spanish lessons check with your school if they have free tickets.

There’s a nice park in the city called Parque Bolivar just a few blocks from the main plaza where you’ll see people walking their dogs, running, kids playing, young people on a date, or people just relaxing and reading. There’s also a “mini Eiffel Tower” here that you can climb. You’ll see plenty of people around this structure taking pictures.

If you want a nice view of the city, you can walk up to the La Recoleta area and have a coffee at Mirador Café. Good food at reasonable prices. No Wi-Fi here, however, so I just bring my Kindle here to do some reading while enjoying the sun, the breeze, and the nice view. 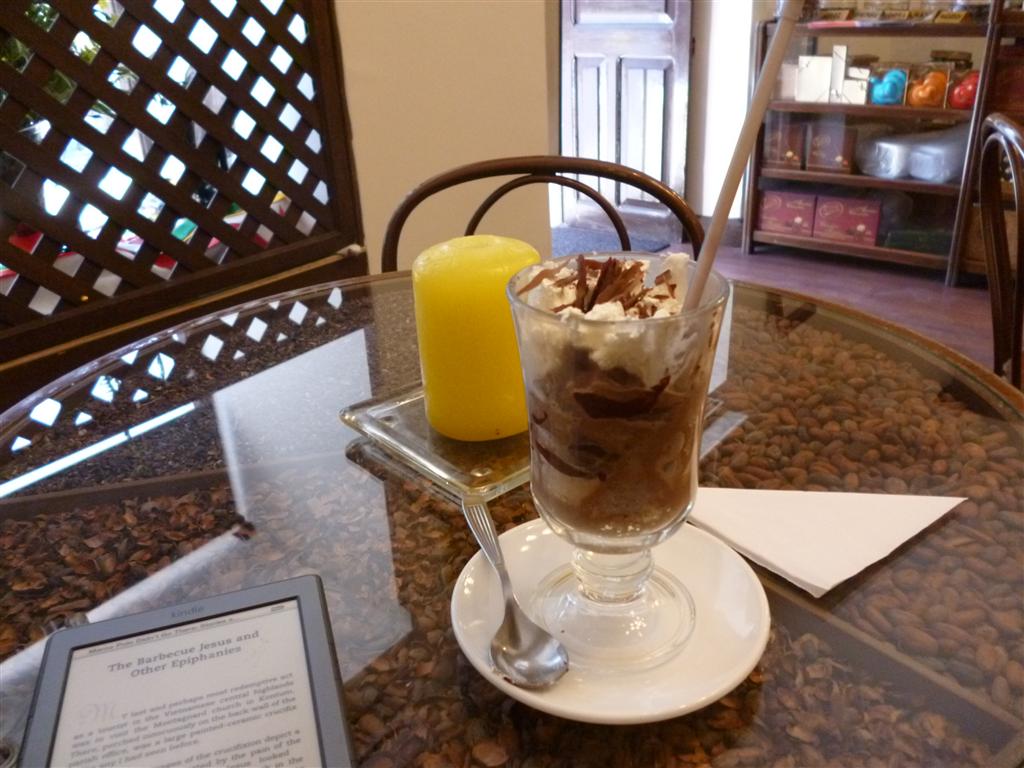 If you like chocolates (who doesn’t?), Chocolates Para Ti makes the best ones in Bolivia. My favorite is their dark chocolate. They have 2 shops in Sucre and they have a café inside where you can try out their hot chocolate or ice cream.

Outside Sucre, you can visit the Sunday Tarabuco Market, do some hikes, check out some dinosaur footprints, visit waterfalls, go horseback riding, or do some treks. There were plenty of tour agencies in the city and you’ll see plenty of tourists in the main plaza, but at the same time it didn’t feel very touristy at all. You won’t find many people approaching you trying to sell you stuff like in Cusco. The city had a very laid back atmosphere, which I really liked. My Spanish teacher told me that tourism was just starting to pick up here. Most language schools here have actually only been operating for about 2 years or less.

Sucre is definitely one of my favorite cities in Latin America. It’s one of those places that I could see myself living in. Maybe I’ll come back here someday and stay even longer.