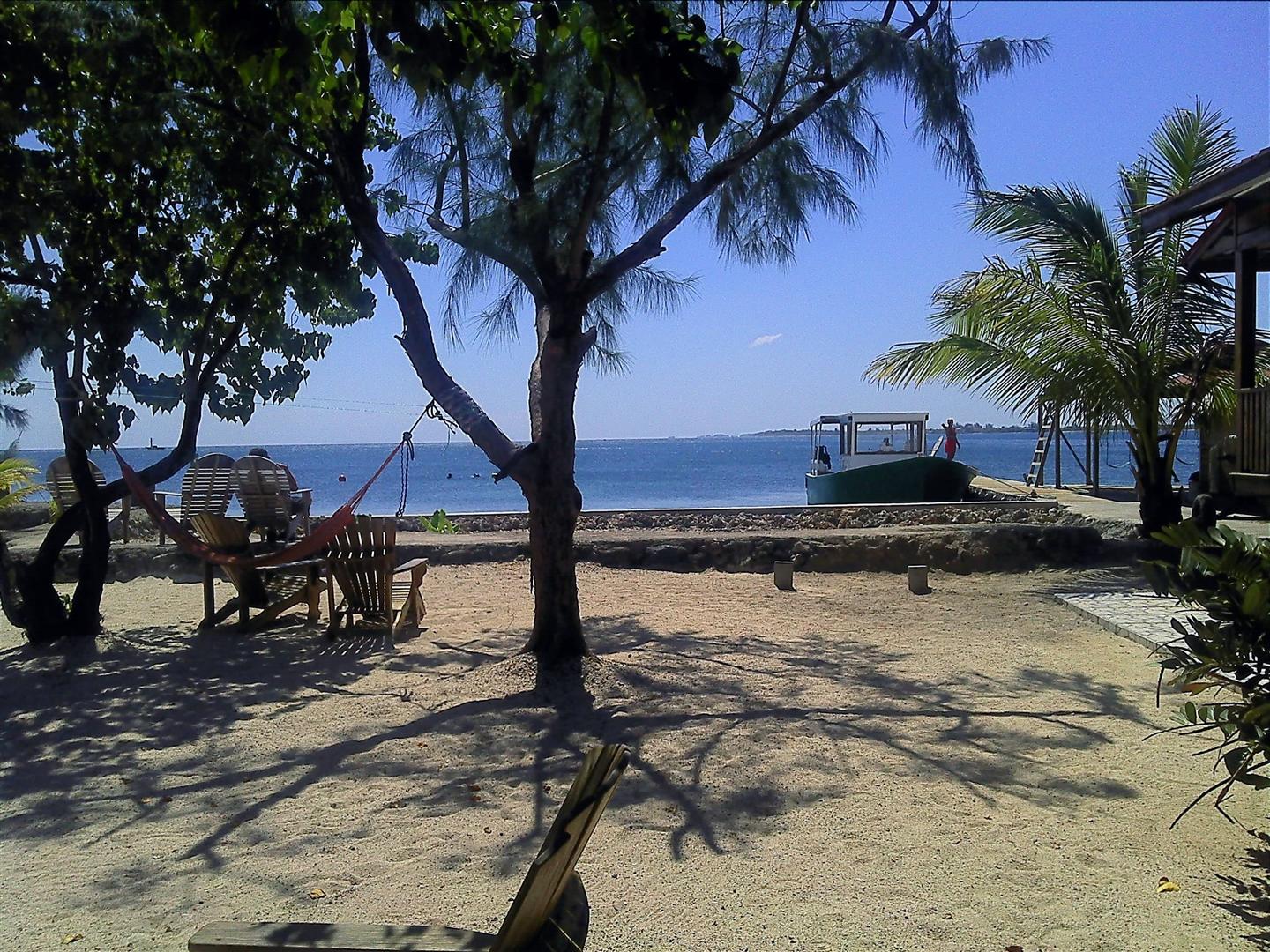 While I was in Guatemala I met a lot of travelers heading to Honduras, mainly to Utila in the Bay Islands to scuba dive or learn how to.

Utila is one of the cheapest places (if not, the cheapest) to dive or learn how to dive, making it very popular with backpackers. Almost everyone I met who has done diving before absolutely loves it. This made me very jealous as I really wanted to try it, but there’s one problem: I didn’t know how to swim.

I heard from other travelers that you don’t really need to know how to swim to scuba dive, but PADI requires it for safety reasons. So once I reached Honduras and ready to check out the Bay Islands, I decided to go to Roatan first as I heard it has more to offer other than diving and I wasn’t sure whether I should even bother with Utila.

Roatan is definitely a beautiful island. Diving is big here as well, but unlike Utila, it has a really nice beach in the West Bay area where you can snorkel right off the beach in shallow water. I spent most of the stay in Roatan at this beach. I actually tried teaching myself how to swim here but no luck.

While in Roatan, I decided to might as well check out Utila since I’m already near the island, even if I wasn’t sure whether I would enjoy it. The other thing Utila is know for is partying, which I’m not really big into. So the two things that Utila has to offer weren’t for me.

From Roatan, I took the ferry back to La Ceiba, then the ferry to Utila. The last 20 minutes or so of the ferry ride to Utila was pretty rough. When I got off the boat and started walking to town, I was approached with people handing out maps and flyers from different dive shops. The entire island seems to be surround by dive shops. I just took a map and just kept walking in one direction to find a place to stay. I met a traveler while I was in Roatan who was just in Utila and mentioned Hotel Trudy as a good place to stay.

While walking with my backpack, someone approached me asking if I was looking for a place in particular. I said I was kind of just looking around, maybe Hotel Trudy. It turned out she’s actually one of the dive instructors for Underwater Vision, where Hotel Trudy is located, so she showed me the way.

While we were walking, she asked me if I was going to be diving there. I told her I wasn’t sure as I didn’t know how to swim. She was actually starting a PADI Open Water session that day and she offered to try and teach me how to swim in the afternoon before the class if I wanted. So, of course, I said that would be great if she could do that.

So that afternoon, she started to teach me how to swim and float. After about an hour I was actually able to do it! I’m still a terrible swimmer but it was enough to pass the swimming part of the course. I’m really glad I ran into her.

You need to be able to swim 200 meters and float for 10 minutes before you’d be allowed to dive. You can also snorkel with fins for the swimming part, if you prefer, but you’ll have to do 300 meters. I went with the snorkeling option as I found it a lot easier. I just barely passed the 10 minute floating part, I was pretty tired after that 10 minutes.

That same day we did the swimming test, we did our first dive to practice some important skills for diving. We went over setting up the equipment and safety checks, then started going underwater. I have to admit I was pretty nervous going underwater the first time. Breathing underwater with the regulator was a weird feeling for me at first, but I quickly got used to it as we spent more time underwater. We practiced things such as clearing our masks of water, moving and breathing underwater without a mask, removing the regulator out of mouths and how to find it if it gets knocked off, what it feels like to run out of air, using our buddy’s alternate air source, removing and putting on our weight belts underwater, and buoyancy control. All of these are very important as any of them can happen underwater and it’s easy to panic if you never experience some of these situations.

There was actually one dive where I panicked. We were at the end of our dive and making the recommended safety stop to get rid of residual nitrogen in our body. During that stop I tried to clear my mask of water but I didn’t to it right. More water got in and I panicked. I wasn’t thinking and started ascending, and I took the regulator out of my mouth as I thought I was near the top but I wasn’t, then the instructor stopped my ascent and put the regulator back in my mouth then I continued to ascend slowly. We were only at 18 meters depth that day, so the safety stop didn’t have to be long, but if we dove much deeper and I ascended to the top too fast, I could easily get decompression sickness which is quite serious. You really have to be thinking, I don’t know why I even took the regulator out of my mouth as there was really no reason to.

We did a total of 5 dives in the Open Water course. I learned a lot from the course. It also includes 2 fun dives which we could do at any time once we pass everything. Being underwater is definitely an amazing experience. You feel so light, everything seems to be in slow motion, and seeing all this aquatic life around you really makes you feel like you’re in another world.

The Open Water certification takes about 4 days and I’m really glad I did it. It costs $268 with Underwater Vision and includes accommodation. Since there are so many dive shops in Utila, I’m guessing the prices are pretty competitive and will be around this price. It’s definitely worth it and I’m really looking forward to doing more dives in the future in different places. I might even go for the Advanced Open Water certification at some point during my travels.