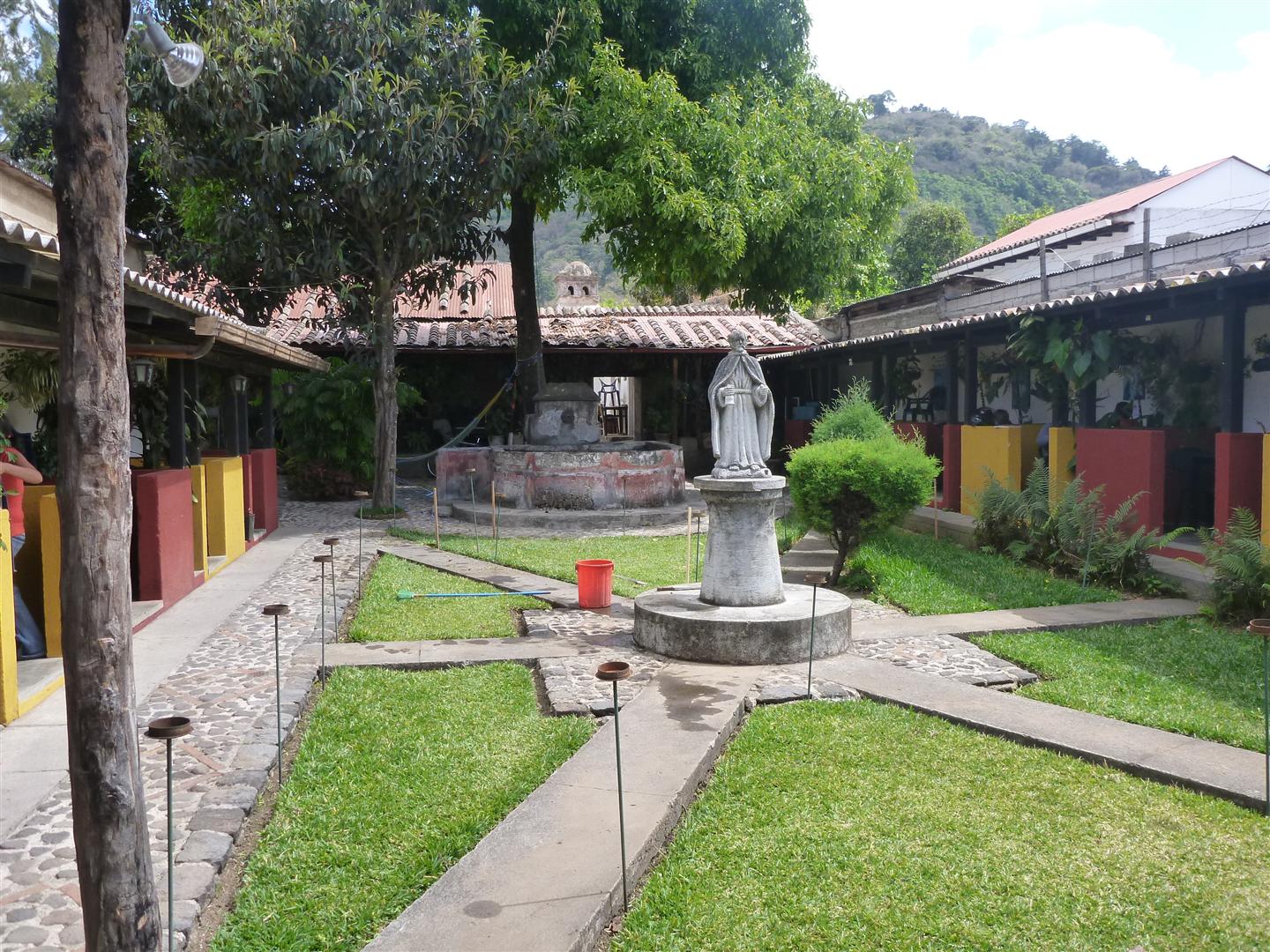 One of my goals for my round-the-world trip is to learn Spanish. I want to learn enough that I’d be able to hold a conversation in Spanish by the time my trip is over.

When I was doing my research on which country to take classes in, Guatemala kept coming up. It’s supposed to be the cheapest country to study in and Guatemalans speak the language very clearly.

I originally thought about starting classes in Quetzaltenango (Xela) as it’s supposed to have the cheapest language schools in Guatemala. It’s also supposed to be not as touristy as Antigua so I’d be forced to really communicate in Spanish. However, when I reached Antigua I was already itching to study the language so I decided to go ahead and take a week of classes here.

I had no idea which school to go to so the first couple of days I just walked around looking for schools. It just happened that there’s one right across the street from the hostel I was staying in called Spanish Academy Sevilla.

I checked it out on TripAdvisor and it had a couple of good reviews. I did some more research and someone in the Lonely Planet forums recommended it. It seemed good enough to me and I didn’t really want to spend too much time researching other schools so I signed up the same day I found it.

I just walked in to the office in the morning and the lady at the front desk was very friendly and gave me a quick overview of the school. The tuition is $125 for 5 days ($25/day), 4 hours a day, Mon-Fri and comes with a book and a notebook. Free coffee and tea throughout the day. They also have some free activities like salsa lessons and bike tours, and some paid ones such as climbing the active Pacaya volcano and coffee tours.

The students seem to come from mostly the USA, Canada, and Holland. I met at least 4 students from Holland, 4 from the USA, and 3 from Canada. There was one from Germany and one from Sweden. The age range really varies. I say half of us are in the mid to late 20s and the others are probably in their late 30s, 40s, and 50s.

This is not the cheapest school in Antigua but the tuition is pretty similar to a couple of other schools I checked out. She also told me that I could just try out one day first if I like and decide if I want to continue. I went ahead and paid just for the first day and she told me I could start right that afternoon from 2-6pm, so I did. I paid for the rest of the week that same afternoon after spending a couple of hours with the teacher that was assigned to me.

These are one-on-one classes (I believe all Spanish schools in Guatemala are like this) so the lessons can be customized to your needs. If you happen to not like your teacher you can request a new one anytime. My teacher was really good and we got along very well. She sometimes tells me stories in Spanish about her friends and family and I was actually able to understand most of it!

She started me with the most commonly used words and phrases that are useful when traveling as I specified that I wanted to learn Spanish mainly for travel. I figured that once I know enough to get by, I can then practice the language as I visit other Spanish-speaking countries in Latin America and keep learning.

Four hours is actually a lot in a day. I thought about getting really serious and sign up for the 6-hour lessons but 4 hours is enough as I need the time in the afternoon to review and practice a bit. It’s really neat to be able to use what you learned right away outside the class. It really makes a big difference as you’re easily motivated to learn more.

I feel like I learned more in that one week, 20 hours of lessons than the one year of Spanish class I took in high school. When I walk around Antigua and listen to people’s conversations I can definitely pick up a lot more than I did when I first got here. I still have a ton to learn and still takes me quite a while to put sentences together when I try to to talk to the locals, but I’m sure I’ll get a lot better as I practice speaking more.

I’m heading to Lake Atitlan next and taking another week of lessons there. I’m actually finding learning a new language fun. I think it really adds to the travel experience.