I’ve been patiently waiting for Dell to release the 2.2 version of the Android OS for my AT&T locked Dell Streak but they just keep pushing it back and there’s currently no specific release date. They’ve already released it for the non-AT&T locked versions but it seems like AT&T is preventing them from releasing it to the AT&T-locked ones. The Dell update package seems to check the baseband version of the device so even if you were able to get an unlock code from AT&T the update won’t work unless you have the specific baseband version that the package was created for.

I was reading the Dell forums and there are a lot of people who are pretty upset about this too. So a lot of them decided just to do it themselves and were able to upgrade their Streaks to 2.2 by using the QDLTool and following this guide from streakdroid.com. It was actually very easy to do and I wish I had done this months ago!

The QDLTool will change your baseband version to GAUSB1A130500 which is the unlocked version. The QDLTool will also install the pre-release version of 2.2, so you may want to upgrade to the official release after that (which should now work since the baseband version of the device has changed, you can download the official release here: http://mobileupdate.dell.com/PackageProductionLocations/Streak_318_12821_00.pkg)

Here are the steps I took, note that I ran the QDLTool on a Windows XP Pro 32-bit machine. Use this guide if you have a 64-bit Windows: http://streakdroid.com/?page_id=87. 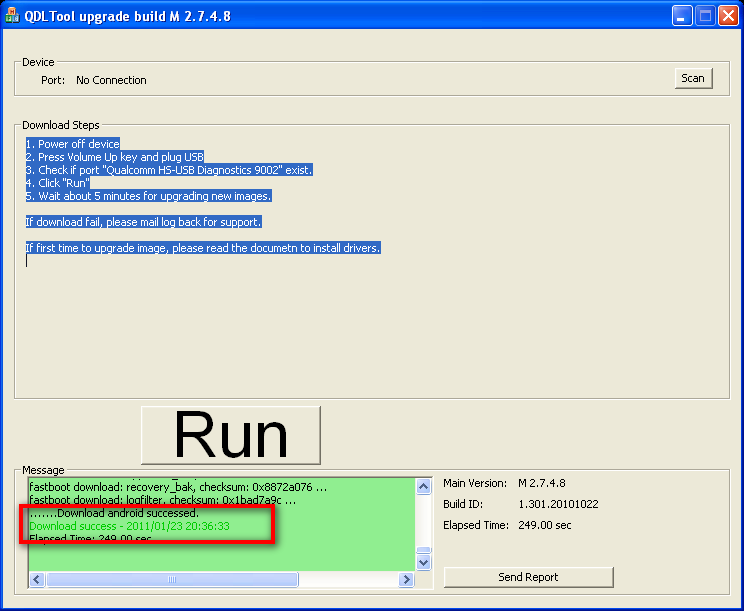 Update (4/22/2011): I just received the OTA update today from Dell for the Android Froyo 2.2.2, so if you were wondering whether you will still receive the official OTA updates after doing this manual upgrade this pretty much confirms it :).