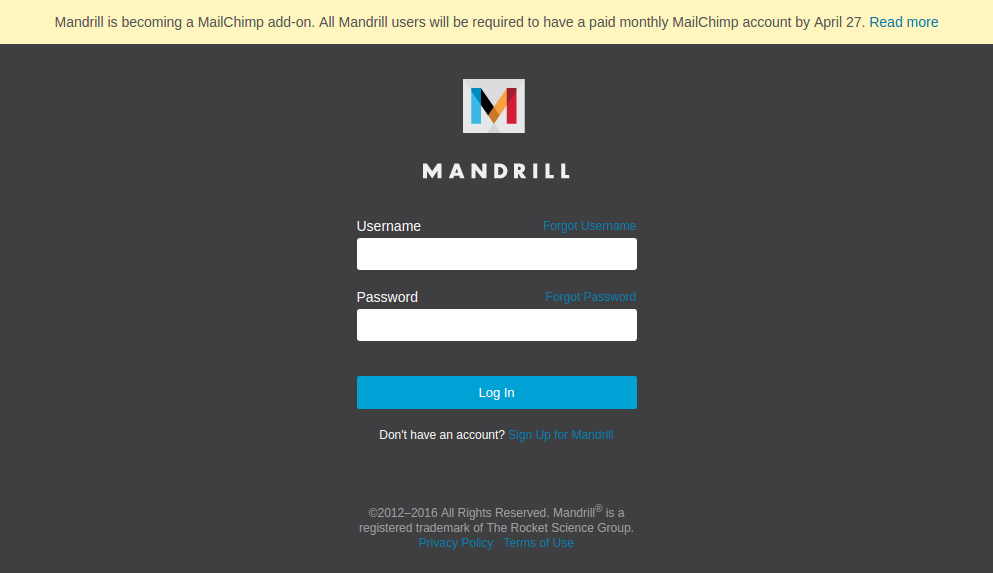 If you're bootstrapping a startup, you look for any savings you can get. That $20/month could be used for other things, like 4 DigitalOcean servers to run your apps on.

I signed up for Mandrill a while back when they were giving away 12,000 free sends/month. Then at some point they changed it so you only get the first x number of sends for the first month free and then you had to pay, but they grandfathered existing users. But now they completely got rid of any free offerings by requiring a paid MailChimp subscription.

Below are 3 alternatives I've found that have a freemium plan.

This is the one I've chosen and I've actually just finished moving all my projects to this service. It's owned by Rackspace and has a simple interface, while at the same time actually gives you quite a bit of options. In a way, it actually feels designed for techies, I love how detailed the logs are which are really useful for debugging.

Mailgun is free for sending up to 10,000 emails/month. Plenty for my needs. You can also use 1 account to manage multiple domains and you can create multiple SMTP logins for each domain. Note that to activate your account you will need a phone number where they can send you a verification code via SMS.

I was actually using SendGrid before I switched to Mandrill. The service was working fine but they just don't give you enough information about the emails being sent.

We were using it at my old job and there was a case where the marketing team claimed there were emails that weren't getting delivered. But it was hard to troubleshoot as the log just doesn't have enough information. They didn't event show the subject of the emails being sent. So at some point we decided to look for an alternative and someone suggested Mandrill. We tried it out and liked it much better so we went with that. I then switched my side projects to Mandrill as well.

My last experience with it was over a year ago, though, so things could be a little different now.

I've never actually tried this one but looking at the feature list, it looks quite good. I tested MailGun first and already liked it as it has everything I need at this point so I just stuck with it.

MailJet has a freemium plan for sending up to 6,000 emails/month.

Hope this post helps! And make sure you switch over before the April 27, 2016 deadline if you don't want to pay.