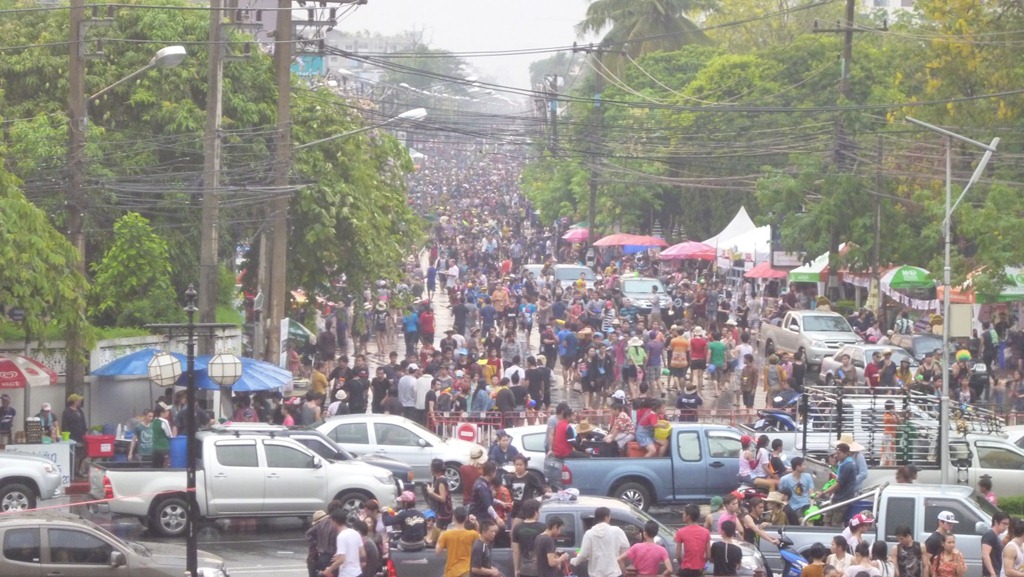 I came to Chiang Mai without even knowing about this festival called “Songkran.” Songkran is basically Thailand’s New Year’s Day celebration (except it’s 3 days long), and probably the biggest and most famous festival in the country.

It’s officially celebrated on April 13-15, but you can see people celebrating it a day early. You celebrate this festival by throwing water at each other while drinking and partying. From what I’ve heard, Chiang Mai is the place to be in Thailand for Songkran. People from all over Thailand come here to celebrate Songkran every year.

April is also the hottest time of the year in Thailand, making it a perfect time for water fights. Chiang Mai has a moat surrounding the downtown area, making that section of the city an ideal place for celebration as water is easily accessible (it looks dirty but it’s actually not bad).

I met up with a few CouchSurfers at 11am the first day of celebration and walked around the city together, having water fights with anyone we could find along the way. Most Thais were actually very polite with the water splashing, except for the kids of course. Most don’t aim for the face and they don’t throw the water too hard. Some would actually just come up close to you to pour water.

There were also stages set up all around the city with different types of performances from singing to dancing to comedy routines. Many of the stages seem to be sponsored by companies promoting their products and they usually have beautiful Thai women on the stage dancing with their big water guns/power washers. 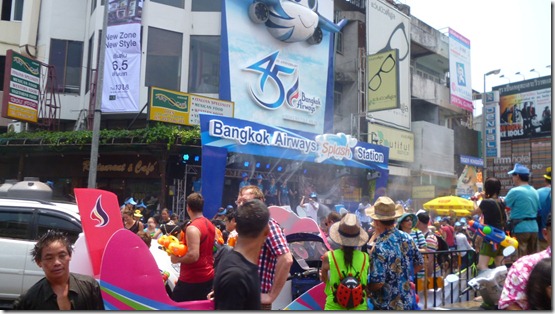 Some people in our group have water guns and the others just a bucket. I prefer the bucket with a string. Why the string? So you can throw the bucket into the moat to get water and pull it back up. You can get one for 20 baht, which is a lot cheaper than the water gun. The locals also usually have drums/buckets of water outside their house that they share with everyone so it’s easy to get refills. Some even have blocks of ice in them, which were always fun to use as people won’t expect the water to be cold as you could tell from their reaction.

Our last stop for that first day was in the Loi Kroh street area where there were actually bars open (most businesses in Chiang Mai are closed during Songkran). The area was mostly filled with tourists drinking and partying. One guy from our group surprised everyone by pulling a Borat, stripping down to his light green mankini.

Everyone got a kick out of it and started cheering and taking pictures. Then two Thai women came up to him and aggressively started taking off his mankini as he struggled to cover his manly parts. The mankini broke and he had no choice but to put his shorts back on in the middle of the street while a couple of people from our group tried to cover him as he got changed. Apparently, this wasn’t the first time that has happened to him. 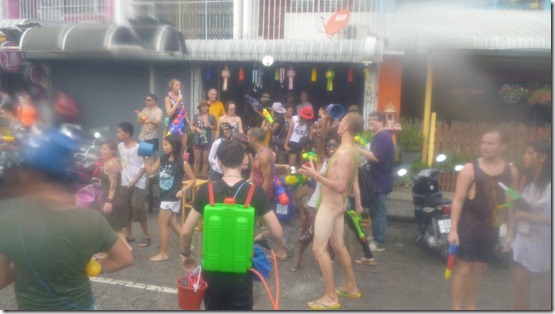 I started walking back to my hotel around 5ish and it started raining very hard. It was funny to watch how people still continued the water fights even when it was pouring! It’s like nothing happened, the party continued.

The second day I slept pretty much all day as I was very very tired. A few of us went out that night checking out different bars/clubs in the city until around 3am or so.

The last day of Songkran I decided to check out the northwest area of the city at Huay Kaew Road near the Kad Suan Kaew mall. The place was very packed, especially by the stage just in front of the mall. There was a concert going on and I’m assuming the performer was a pretty famous singer. It’s mostly Thais in this area, saw very few tourists. Everyone was very nice and friendly and just having fun. 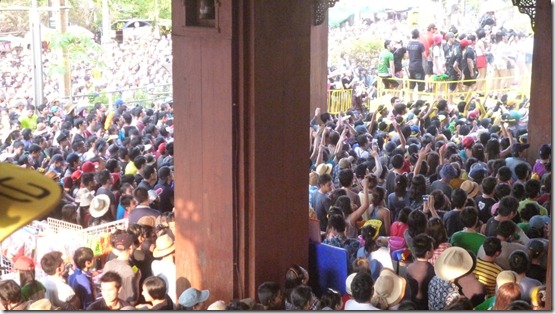 I met up with one of the CouchSurfers I met a couple of weeks back over there and his two Thai friends. We hung out by the other stage near the 7-Eleven across the mall as there were it was less crowded and had a few drinks there until the performances were over. We then moved to the restaurant/bar at the hotel next to the mall and continued the party. After that, we decided to go to a blues bar in the Night Bazaar and pretty much hung out there until the place closed. I’m not a big blues fan but I actually really enjoyed the music there.

I really enjoyed my time during Songkran here in Chiang Mai, it’s definitely one of the best festivals I’ve been to. Not many places out there where you can throw water at random strangers for 3 days in a row and they’re happy about it. I also found the Thais to be very nice and friendly and it was a joy celebrating it with them. I remember the Thai lady we were with the last day told me that she’s usually very serious and working hard on her business throughout the year, except during Songkran where she lets loose and go crazy.

Some tips for celebrating Songkran in Chiang Mai