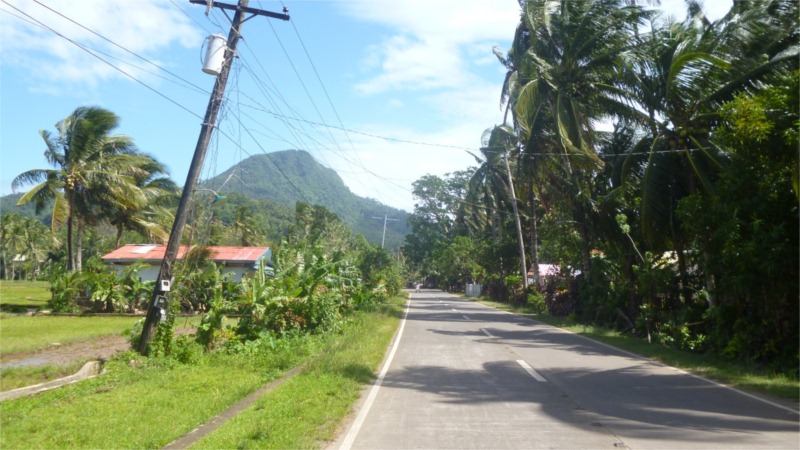 I flew in to Cagayan de Oro from Davao City last week and decided to stay a few days there before heading to the island of Camiguin. It’s a nice, laid back, city. Also, the only main city I’d been to so far where I didn’t see a lot of old western men with very young Filipina companions (I have nothing against it, by the way, just an observation).

Cagayan de Oro city is famous for it’s Night Café which happens every Friday and Saturday night. I wasn’t planning on doing much here as I wanted to catch up on some blogging/other computer work. I stayed in the Divisoria area, where the Night Café is happening, and pretty much spent most of my time in coffee shops. There’s a Coffee Works and Bo’s Coffee with free Wi-Fi just a few minutes walk from Park View Hotel (good value for the price), where I was staying.

At around 5PM on Friday afternoon, the Divisoria area was already very busy, with vendors setting up their tents. At night, the area was packed with people (mostly Filipinos, very few foreign tourists). I bought some lanzones and hang out in the plaza area where a live band was about to perform. Just past 9PM, the band started performing. Mixed of popular songs, love songs, Filipino songs. You can also make a request if you have a song in mind. The band was actually pretty good. 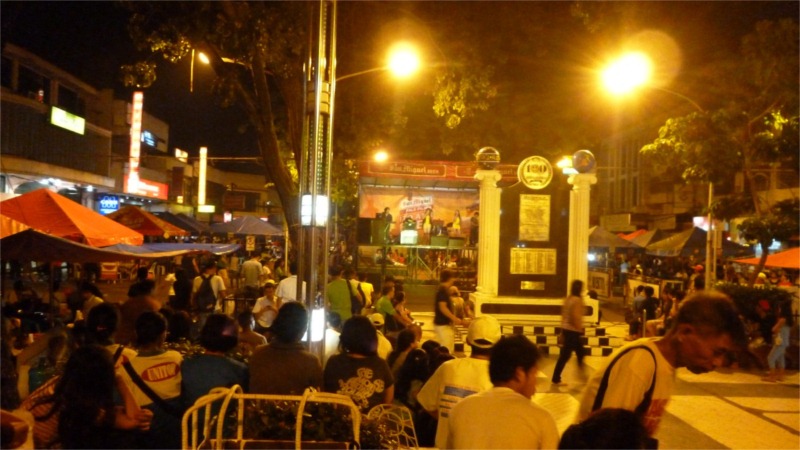 I came back again the following night to meet some CouchSurfers. We met up at Park Café, also in Plaza Divisoria, then had a few drinks in one of the tents while sharing stories. Got some tips for Camiguin from them as well. Great group of people, we hung out there until 12AM, when the vendors started turning off the lights and packing up.

The next day I woke up around 8ish and had no idea what time the buses leave. I figured there would be a bus leaving at least every hour, I couldn’t find a schedule anywhere.

Getting to Camiguin from Cagayan de Oro

1. I took a taxi from my hotel in Divisoria to the Agora Bus Terminal (by the Agora Market).

2. Paid about 6 PHP terminal fee (it’s advertised they have Wi-Fi there as well and the fee covers that), then found a bus (no A/C) heading to Balingoan, which was just about to leave and I took it. They charged me 84 PHP for the bus ride.

3. Reached the bus terminal in Balingoan about 2.5 hours later, asked around where the ferry terminal headed to Camiguin and it was only about a 5-minute walk, so no taxi needed.

4. Found a Super Shuttle Ferry booth at the ferry terminal and a boat headed to Camiguin (Benoni port) was leaving in 5 minutes, I saw people already boarding. Got a ticket for 170 PHP and had to pay an extra 2.25 PHP terminal fee.

5. About 1.5 hours later, we reached the port of Benoni and tricycles, multicabs, jeepneys, and vans were already waiting for passengers. Took an air-conditioned van for 30 PHP to the town of Mambajao, the capital of the island. Took about 20-25 minutes to reach the town.

In Mambajao, I had no idea where to stay so I just walked around. I was expecting many hotels/guesthouses right next to each other at the town center, but that wasn’t the case. I checked out theRooftop Hotel right at the center but found it too expensive. Found another one called Sunriser Pension House near the public market which was a lot cheaper: 150 PHP for a small room with fan and shared bathroom, 450 PHP for a room with 3 beds, private bathroom, TV, and air-conditioning. I took the more expensive option. The couple who owns the guesthouse were very nice.

Woke up early the next day as I wanted to move to another area closer to the sea. Made a couple of phone calls, first one was full. I called another, Pabua’s Cottages, and they had availability. I checked out and walked near the public market again to take a habal-habal (motorbike) to Pabua’s Cottages in Yumbing. It cost 50 PHP for the habal-habal, which I think I might have been overcharged as I took a tricycle a couple days later back to Mambajao and that only cost 10 PHP.

The guy I spoike with on the phone showed me the cottage and the only one available had 3 double beds, too big for me, but he gave it to me for 700 PHP instead of the regular 1500 PHP rate. I asked for further discount for a stay of 3 nights but he said he couldn’t give anymore because of the size of the cottage.

Rent a motorbike and explore the island

Since the weather looked great, I decided to rent a motorbike for 350 PHP for the entire day to explore the entire island (only about 60km circumference). Beautiful views along the way, especial when you can see the coast. I wish I had taken more pictures. The roads were very good as well, paved throughout. Ask for a map at your hotel to get an idea where to make some stops. 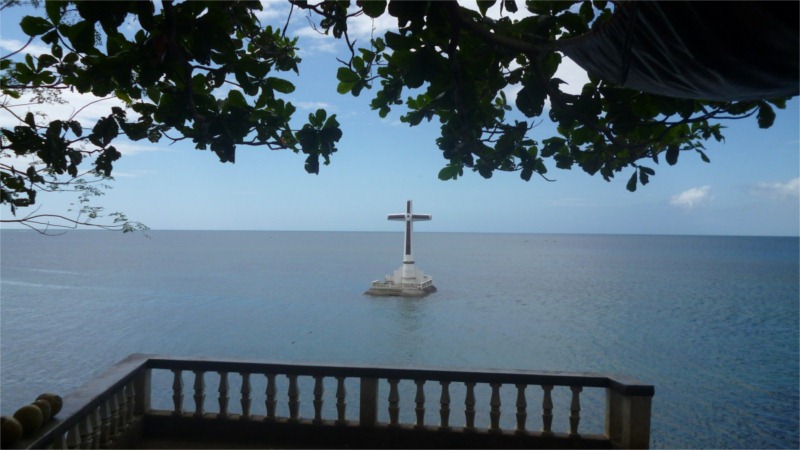 This was my last stop for the day. There were plenty of signs on how to get here but missed an important one as the sign was facing the other way, so I had to ask around and someone told me to backtrack, where I then saw the sign further uphill. Entrance fee was only 30 PHP. 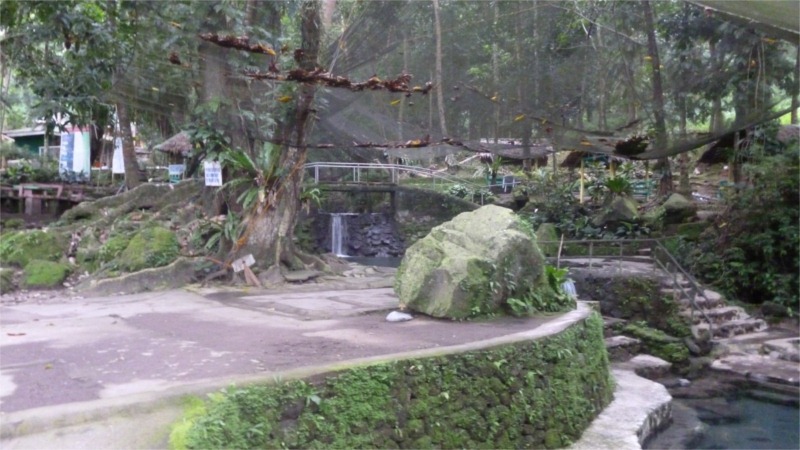 The area itself was nice, 1 big pool, 1 medium-sized, and 2 small ones. The smallest one was the hottest, but I thought not hot enough for a hot spring, a bit disappointing. You don’t even see any steam. But it was still a good, 1-hour stop to end the day.

Saw this on the way and looked beautiful. I planned to visit it early the following morning but it was raining all day! Apparently, best time to visit was around 6AM, where most of the island is still visible before the high tide later later in the day.

I made a stop at a restaurant the previous day during my motorbike ride and the lady who owned the restaurant highly recommended it. Unfortunately, because of the rain, I wasn’t able to visit. I was also pretty sick from a cold and was losing my voice, so I spent most my time in my room.

Again, since it was raining and I had a cold, no diving for me as I couldn’t equalize…

Overall, still a good trip, even if all I was able to do was explore the island. It’s just a little annoying to get to as you have to take a bus, then a boat to get there.

It also didn’t feel overly developed yet, most of the island still seemed unoccupied by big hotels and resorts, giving it a more laid back, authentic feel, with reasonable prices. You don’t get hassled by people selling you tours, which is kind of nice. I have a feeling, though, that in 10 years, it will be different.