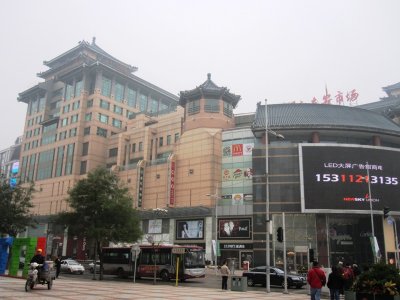 This is just to summarize my experiences from my recent trip to Beijing before I forget them :).

We arrived at the Beijing International Airport on Thursday night, October 21. First thing I noticed was the air quality as we were approaching the exit, you can smell the pollution. Once outside, you’ll see taxis lined up and you just pick the one in front, we had to take two taxis because our luggage wouldn’t fit in one. Minimum fare for the ride is 10 yuan (about $1.54). We stayed at Xinhai Jinjiang Hotel which I think was about 20 minutes away from the airport and our fare ended up to be around 100 yuan per taxi which isn’t bad at all.

The hotel we stayed at was a 4-star hotel and the rooms and the hotel itself were really nice. For $60 a night I’d say it was a very good deal! The hotel staff were very friendly and helpful and they seem to all speak or understand English, though I’d recommend to at least know how to say “hello” and “thank you” in Mandarin. They also provide currency exchange with no service charge (I believe they use Bank of China so the rate would be the same as the bank’s) which we found out a few days later, it could have saved us a trip to the bank earlier if we knew about it. It’s also a good idea to have someone at the hotel write down the name of the places you wish to visit in Chinese so if you can show it to the taxi driver if you decide to take a taxi to get there. You should have the name of your hotel written down in Chinese as well just in case you get lost :D.

After checking in, we walked around the area and checked out Wangfujing and ate dinner there. There are a lot of buildings here that look pretty new and also a lot of high end stores. It also felt safe to walk around the area. One thing to be careful about, though, is crossing the street. The cars won’t stop for you to let you cross, normally you’re the one that is expected to stop and let the cars pass. There are pedestrian crossing lights in certain areas but still be careful even if it says it’s ok to cross as there might be cars making right turns. For very busy streets with no crossing lights you will need to do it a little at a time or you’ll be waiting for quite a while.

Our second day there, we decided to check out Summer Palace. We started our day by walking to the subway station and purchased a card (kind of like a metro card) which can be used both on the subway and buses. We took the subway most of the way there, but also checked out some other areas along the way. Food is also pretty cheap here, our lunch which is probably good for 4 people only cost us around $13. On the way back I think we took a combination of taxi, bus, and subway. We got pretty comfortable using public transportation. It also helps a lot that they write the signs/announce the next top in both Chinese and English.

On our third and fourth day we did mostly eating, shopping, and walking around. We can’t afford to buy from the high end stores so we did most of our shopping at Yashow Market. We also made sure we tried out the roast duck while we’re here in Beijing. We went to a restaurant in Wangfujing where roast duck is its specialty (forgot the name) and the duck was really good. We also tried out some street food in Wangfujing but I thought they were kind of expensive (5-15 yuan) for what you get, but definitely a lot cheaper than what you’ll find in the US. It’s probably because we went to a tourist spot.

Our fifth day there, which was also our last full day, we checked out the Great Wall in Mutianyu. We were actually originally planning on doing this much earlier but the weather wasn’t cooperative our first few days there, mostly cloudy/foggy with some rains. The sun fortunately came out that day and the skies finally cleared up (we weren’t sure if those were clouds or air pollution), so we got some really great views from the Great Wall.

I would probably visit China again at some point and check out the other cities such as Shanghai. I would also probably check out a different section of the Great Wall next time I’m here and maybe stay there overnight :).