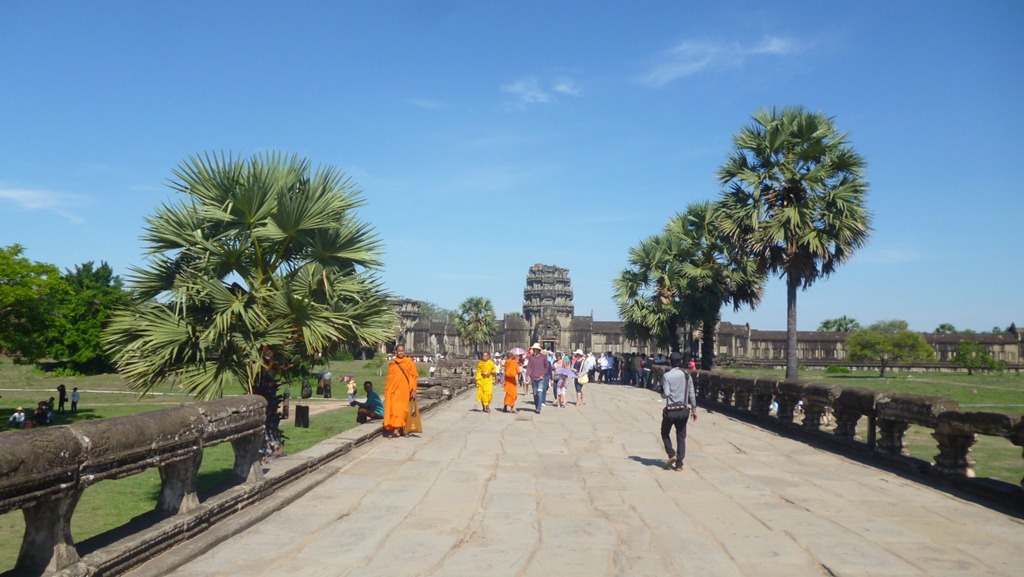 I’ve asked people I’d met who had been to Angkor Wat before on how much time they would recommend to set aside to check out the ruins and many said about 3 days. I did some online research as well and learned the same thing: 3-4 days to “properly” see the ruins.

But since I’m not really a big ruins guy, I decided just 1 day would be enough for me.

I arrived in Siem Reap from Phnom Penh the night before my planned visit and asked the person at the reception right away about the tour. The recommended way to do this if you only have 1 day is to hire a tuk-tuk for the entire day for about $15 if starting out around 8am, or $20 if you want to see the sunrise and start around 5am. You can also choose to do either the “short” tour or the “long” tour (additional cost), where the long tour would allow you to visit more ruins. I opted for the 8am short tour.

I went there in May and it was very, very hot. It was very hot even at night time. Hotter than Bangkok. The tuk-tuk driver knows the route to take for the tour so you don’t have to plan anything. But since you’re hiring him for the entire day, if you have some other destinations in mind you can tell him where to go (which makes me wonder if you can do the “long” tour even if you only paid for the “short” tour).

The tuk-tuk driver drove me to the park entrance where I bought a one-day ticket for $20. They take your picture and print it on the ticket. My driver then got a call and he said he had to go due to a family emergency. So my hotel then sent another driver and we were off to the first temple.

The driver dropped me off at the entrance and told me he’d be waiting for me at the parking lot. The first temple was pretty big and I spent quite a bit of time here, taking my time and moving slowly because the heat was really getting to me. When I was done, I went back to the tuk-tuk parking lot to look for my driver and I couldn’t find him! I actually didn’t remember what he looked like and the tuk-tuks pretty much looked the same so I walked around quite a bit looking for him. I then remembered I took some pictures while on the tuk-tuk so I checked my camera and I had one picture where I could see my driver’s helmet so I looked for that.

I finally found the guy and he was sleeping, so he didn’t see me pass by when I was looking for him! I woke him up and he apologized for napping and we headed off to the next temple. We did about 6-7 temples and honestly that was enough for me and I couldn’t wait to get back to my air-conditioned room and take a nap. We were done by around 2pm.

While I thought the ruins were very nice, I wasn’t really that impressed with them. Maybe I set my expectations too high, or the very hot weather made exploring them less enjoyable, or probably because I didn’t really know anything about its history. If I had read about it ahead of time I’d probably enjoy it more. It didn’t give me that “wow” impression that Machu Picchu did (I know they’re very different and shouldn’t really be compared). If you’re not really crazy about ruins, then 1 day, in my opinion, should be more than enough.