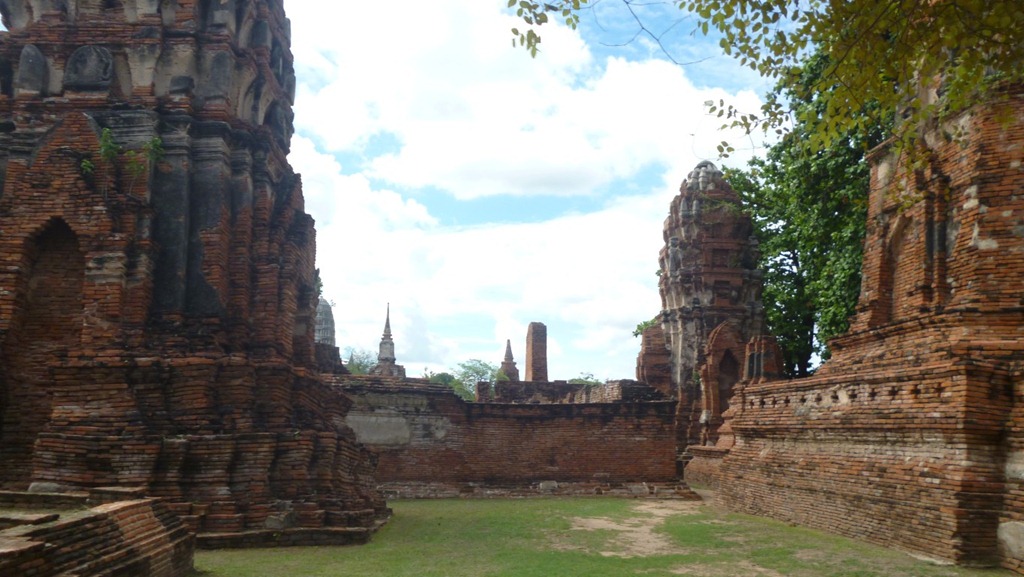 I was looking at Couchsurfing’s website one day while I was in Bangkok and someone posted something about going to Ayutthaya. I’ve seen similar posts before but I actually had no idea what’s to see there. But since it was pretty close to Bangkok, around 1.5 hours by bus, I decided might as well join.

We decided to do take the train on the way there as it seemed to be the popular way to do it and was supposed to be pretty scenic. I met up with 3 other Couchsurfer at Hua Lamphong station and bought the tickets together. There was an expensive “express” train and the cheap local one. The express train cost 200baht and supposed to take about an hour and air-conditioned. The local train was way cheaper, only 15baht, and supposed to take about 2 hours and open air. We figured since it was only a 2-hour ride we’ll just go with the cheap 15baht one.

For 15baht, we were actually expecting to be standing and worried it might get too hot. But it turned out there were plenty of seats and it was quite comfy. But the supposedly 2-hour trip turned out to be 3.5 hours long. The train stopped way too much. At one point it was stopping almost every 2 minutes. It took forever. But we used that extra time to talk and get to know each other better. Also, the scenery along the way really wasn’t that great. We were waiting and waiting for the view to get better but nothing really special.

When we arrived, we ran into another Couchsurfer and then looked for a restaurant first to eat as we were pretty hungry due to the long train ride. The weather here in Ayutthaya turned out to be much better than Bangkok. It had been raining a lot in Bangkok the last few days but Ayutthaya was sunny with mostly clear skies.

People go to Ayutthaya mainly for the ruins spread out in the city. It used to be Thailand’s capital a long time ago. You can rent a bike, motorbike, or just walk to check out the ruins. The city is located in a small island, connected to the mainland by a bridge. 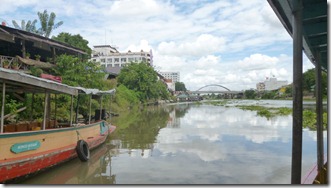 We decided to just take a walk and tried to figure out how to get to the island. We saw a ferry sign nearby for a boat crossing for just 5baht. It was a quick 5-minute ride and we were there. One of the locals on the boat gave us direction on how to get to the ruins. We decided to check out the most popular site first.

It seemed like most people in the group was interested in the site with the head of a Buddha statue stuck in a tree so we did that first. The entrance fee was 50baht, but it looked like the sign said something in Thai that it’s free for Thai nationals. Me and one of the girls in the group could pass for Thai and thought about just walking straight and not say anything, but then felt bad and paid anyway since it was only 50baht. You can buy postcards at the ticket booth also and the women in the group noticed one with two elephants having sex and found it quite entertaining.

The ruins here were actually pretty nice. Nice setting with trees to provide shade as it was very sunny. I liked the color of the stones also. The Buddha head in the tree was much smaller than what we saw in the pictures, though. We spent quite a bit of time in this first site before heading out to the next one. 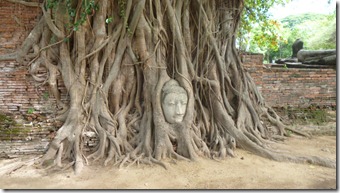 As we were walking to the next site, we were looking at it from a distance and the ruins there looked pretty similar to the first site, so we decided to just skip it and have some drinks instead at a restaurant across the street before making our way back. I recommend to avoid the restaurants near the ruins as they cost about twice as much as the ones just a few blocks further down.

We also stopped by the market to buy some food/fruits for the trip back. For going back to Bangkok, this time we chose to just go with a minibus instead of the slow train. There were also plenty of minibuses around the city so it was the easier option anyway. The minibus fare to Victory Monument in Bangkok was 50baht, more expensive but also a lot faster. It took about 2 hours to reach Bangkok due to traffic and it was raining when we arrived.

Three of us from the group decided to get a foot massage when we got back at Victory Monument which was a really nice way to end the day.