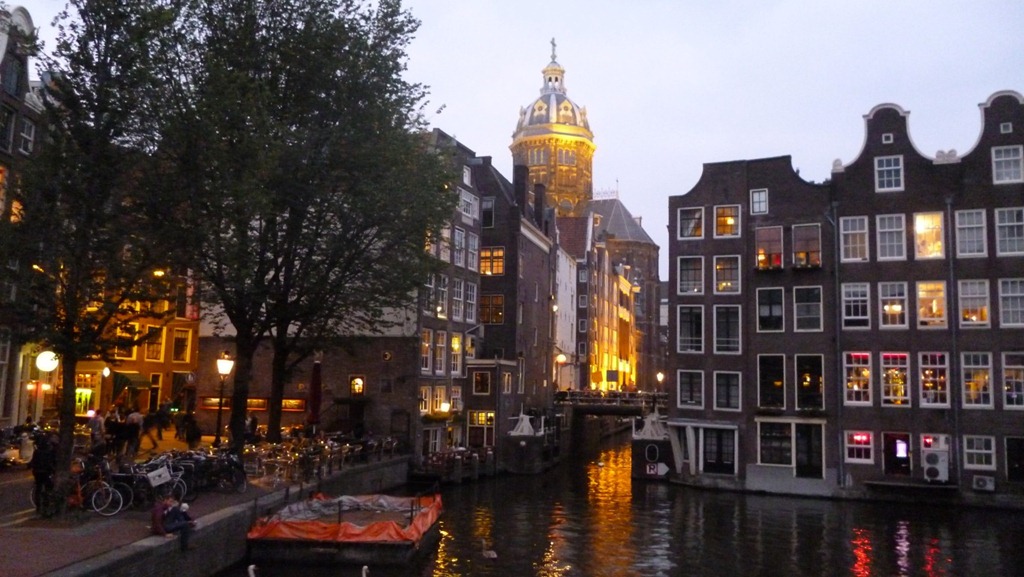 The first things that come to mind to most people whenever they hear about Amsterdam are red light districts and “coffeshops” (yes, just one word) that sell marijuana. There’s more to Amsterdam than this, but these are definitely the main attractions.

Amsterdam is considered one of the most expensive cities in Europe so I decided to only spend 3 days here. While the Netherlands is a very small country, some might even consider the entire country more of a city, 3 days is not enough to really experience it. There are cities within an hour away that are supposed to be very nice as well, but I decided to just stay in Amsterdam due to my short visit..

Amsterdam is definitely a very beautiful city. The architecture looked very different from other cities I’ve been to so far. Some of the buildings actually looked “fake” to me. There are so many canals everywhere and many of the streets looked very similar.

There’s a nice, big park named Vondelpark about 40-minute walk from the city center as well where you can have some quiet time, take a stroll, or ride a bike. Riding a bicycle is very common here, it’s actually one of the first things I noticed in the city when I arrived. They’re used everywhere and there were so many of them that you have to watch out for them when you cross the street.

Now for the main attractions: coffeeshops and the red light district.

From what I’ve read, selling weed is technically illegal in Amsterdam but it’s widely tolerated if being sold in small amounts in coffeeshops. I didn’t try the weed here or any of the “happy” foods, but I did go to one that’s also an Internet café to print my boarding pass. They have a menu where you can choose from different kinds. You can also just have regular coffee and food here. You’re allowed to smoke in the coffeeshops.

This is probably one of the main reasons people come here. Weekends appear to be very busy judging by the cost of accommodation, they basically double the rate. It’s probably a popular weekend destination for people in neighboring countries where marijuana use is illegal. I remember having a conversation with one of my roommates from France one night and he definitely seemed high.

You can’t visit Amsterdam and not check out the Red Light District. I read that there are different red light districts in Amsterdam, but the most popular is called De Wallen in the city center. It’s actually in a nice location and don’t be shy or afraid of coming here as it’s considered very safe thanks to the police presence (stay in the more crowded area, there were some quiet streets where some guys were offering me more hardcore drugs).

After 9pm on a weekday, other streets of Amsterdam were actually very quiet except the red light district. It’s very interesting to see and it’s not just for men looking for a companion. You can see couples, groups of men and women both young and old, and families here. The area actually felt very normal.

There were sex shops everywhere selling all kinds of interesting products for the more adventurous. Venues offering live sex shows and peep shows. Women in all shapes, color, and sizes knocking on their windows to get your attention as you pass by. There were restaurants, bars, and coffeeshops in the area as well.

I remember seeing a line outside a place called Casa Rosso that has live sex shows one night. My guess was they were just about to open. The people lined up outside were actually mixed: men and women, groups, old and young. Some even looked like a family. The entrance was 40 euros without drinks and 50 euros with 2 drinks. I was actually curious to go in but didn’t because I thought it was a bit pricey and it got mixed reviews on Yelp.

So I decided to check out the peep show place next door instead where you can see something similar for 2 euros for 2 minutes of viewing. I’ve never been in a peep show place before but it was pretty easy to figure out how it works.

By the entrance, there were a bunch of posters of the performers. There were then numbers on the top of the posters that lights up and each number corresponds to a poster. This is how you figure out who’s performing before you enter the peep show booth. When I was there, there was only one poster that showed a couple, most were single women.

When you’re ready, just go to one of the unoccupied booths surrounding a circular stage where the show takes place. Inside there’s a rectangular glass window that looks tinted so you can’t see anything. Insert 2 euros in the coin slot to clear up the view and watch the show. It was just one girl inside at the time I was there so it was more of a strip show than a live sex show. It was still interesting to experience to see how it worked.

For those who want more “interaction,” you can approach one of the window ladies. There were women from different backgrounds, sizes, ages, and I even remember seeing section where the women behind the windows looked like ladyboys. If you’re interested, just knock on their window and they’ll come out to talk. It looks like you can negotiate prices. I remember overhearing a conversation between an old man and a window lady and the man asked if the lady offers a senior citizen discount (not sure if he was just joking). It’s really very open here and it’s not uncommon to see customers talking to the ladies. And again, it’s not just for single guys, I’ve seen women and couples talking to the ladies as well (but maybe they were just asking for directions?).

Amsterdam is definitely a city to see at least once. It’s very interesting to be in a city where smoking weed and prostitution are very tolerated yet the city feels very normal and very safe. While I don’t know the statistics whether legalizing prostitution and marijuana use proved to be better for the Netherlands, they seem to be doing pretty well.