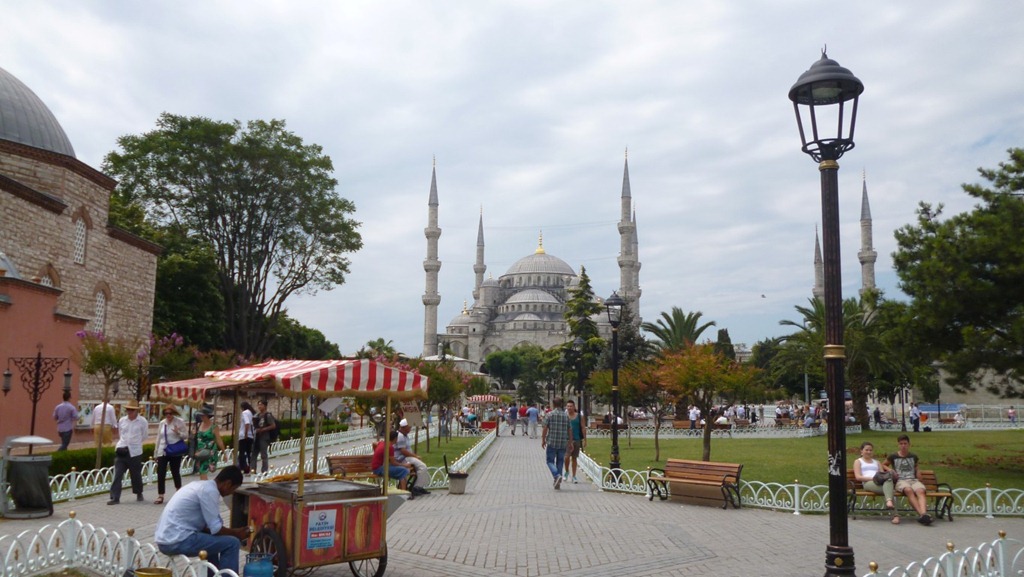 I wasn’t originally planning on visiting Turkey. My plan was to head straight to Serbia but since my flight had a stop in Istanbul I decided to might as well check it out. I gave myself 2 weeks to see the country and was surprised to learn that there was so much to see.

Turkey is a very interesting country with a lot of history. It’s located both in the European and Asian continents. It’s mostly a Muslim country but I don’t think most people follow the religion very strictly as I was there during Ramadan and was surprised to see that most restaurants were open and serving food and drinks. I was actually glad about this as I was just in Dubai before coming to Turkey and it was tough doing some sight-seeing there and not being able to find food and eat or drink in public.

I found the Turkish people very friendly, met some really nice locals there. But beware of those being a little too friendly in the tourist areas. For example, in the Istiklal Avenue and Sultanamet areas of Istanbul, I kept getting approached by men, starting conversations then later getting asked ifI wanted a massage or go with them to some bar to meet Turkish women. Of course, it’s possible that some of them were genuinely friendly but the way they approached me gave it away as they were very similar. They usually start by saying something to you in Turkish or asking for a lighter, then continues walking with you while asking the typical tourist questions, and then makes an offer to go somewhere and meet women.

A lot of people seem to speak Arabic here as well in addition to Turkish. But very few people speak English, even in the very touristy areas. I remember buying a bus ticket at a tourism office and the guy didn’t speak any English at all, but we were able to do business by hand gestures and pointing at the computer screen.

Food and accommodation were relatively cheap. You can get a tavuk doner wrap (wrap with chicken and vegetables inside) for under $3. You can get your own private room in a guesthouse (usually calledpansiyones) for about $15-20. Hostels were very few and won’t really save you money as a dorm bed costs about the same as a private room in a guesthouse.

Below are the cities I visited in my 2 weeks there, which were all on the western side of the country. I didn’t have enough time to check out the other cities on the eastern side, but that would be an excuse for me to go back. 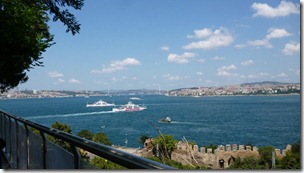 Istanbul is the biggest city in Turkey. The city lies in both Europe and Asia. There’s a bridge that connects the 2 sides. You can also take a ferry to travel between them along the Bosphorus strait in 15 minutes.

For sightseeing, it’s best to stay near the Sultanahmet area in the Old City as many of the main tourist destinations are around that area. It’s also close enough to the ferry station (Eminonu) where you can take a 2-hour boat cruise for about 10 Turkish lira (or 25 lira for the long tour). You can buy the tickets directly at the pier. Avoid the people selling you the tours as they quote the prices in euro, making the price roughly 2.5 times higher.

There’s a lot to see and do here: visit mosques, museums, parks, shopping, Turkish baths, watch performances, etc. All the mosques I visited were free. For the Hagia Sophia museum, you have to pay an entrance fee of 25 liras, which I found pretty disappointing.

If you like parks, check out Gulhane Park. It’s a very nice park and gets a nice breeze from the sea. I saw lots of people here napping in the afternoon. There are cafes up the hill where you can have a nice Turkish coffee while watching the boats crossing the Bosphorus.

For nightlife, check out Istiklal Avenue in the Beyoglu district. Just watch out for the protests as the police sometimes throw tear gas at the crowd. This avenue is busy until the early morning.

About 6 hours away by bus from Istanbul is the city of Canakkale, near Troy. It’s a pretty city by the sea, giving it a nice breeze.

In the city center, you can find the Trojan Horse that was used in the movie Troy. It was donated to the city in 2004 after the movie was released. The ruins of Troy is only about 15km away from here, but I didn’t go as I’ve heard there wasn’t much to see there. 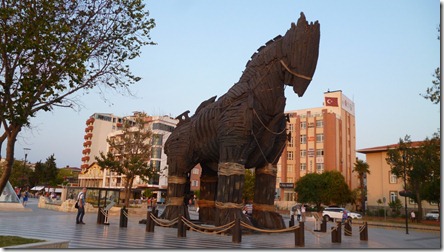 I did take a tour of the Gallipoli peninsula and found it quite interesting. During World War I, the Allied forces sent men (mostly from Australia, New Zealand, and England) to Gallipoli to try and capture Constantinople (now Istanbul). They figured the Turkish forces would retreat from the war if they capture the city and this would also secure a route to Russia. This campaign, however, turned out to be a huge failure and many lives were lost on both sides. It was interesting to see the sites where the armies fought and imagining the number of soldiers fighting in such a small area. Each April, Anzac Day ceremonies are held here to honor those who served in the war.

I only spent 1 night in Izmir. I thought about spending another night here but I wasn’t really impressed with the city. I just didn’t find anything special about it. 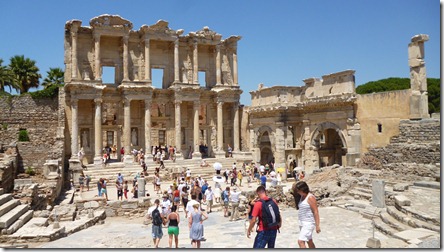 Selcuk is a popular stop for those who want to visit the ruins of Ephesus, an ancient Greek city. The ruins were pretty impressive, you could easily spend a few hours here. You can take a dolmus to Ephesus at the bus station in Selcuk for about 2.50 lira. It’s also possible to walk there and would take about 40 minutes.

There are also other historical sites near the town, such as the Temple of Artemis, one of the Seven Wonders of the Ancient World, but not much of it is left. It’s basically just one column left standing.

It’s also worth checking out the nearby town of Sirince about 40 minutes away (costs 3 lira on a dolmus). The town is known for its wine and you can get some nice views from here as well. 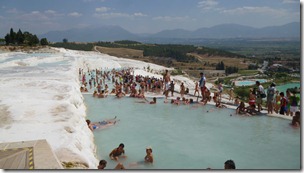 A short 3-hour bus ride from Selcuk is the town of Pamukkale, famous for its travertine pools. The first time I’ve seen pictures of Pamukkale I thought the pools were surrounded by ice, but then noticed the people in the pictures were wearing bathing suits.

The entrance fee to the pools was 20 lira for the day. There are also ruins to see up in the mountains. The fee was well worth it. Just make sure to bring drinks and food/snacks with you as they cost about 3 times as much in the park. 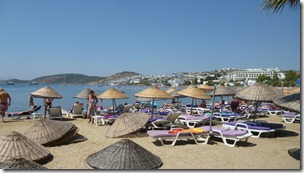 Bodrum was my last destination in Turkey. It’s a popular summer destination for both tourists and locals due to its beaches and nightlife. For the better beach, take a dolmus to the Gumbet area.

There’s a nice castle in the city overlooking the harbor. It was very, very hot during the day here in the summer so I usually take my walks late in the afternoon until night time. Lots of shops and restaurants all over the city.

I actually didn’t visit any of the clubs here as I just wanted to hit beach, read a book, and relax. But there were some big clubs there such as the famous Halikarnas club, though I heard it’s overpriced. A lot of people were just taking pictures outside the club.